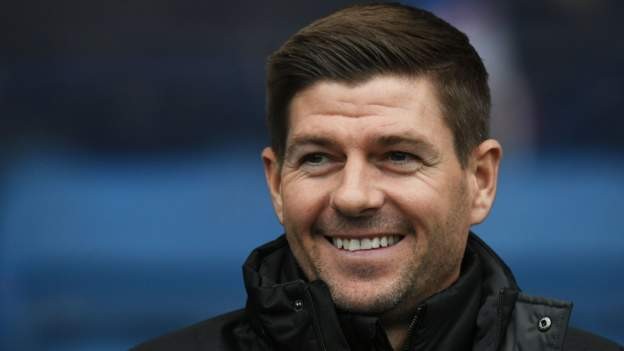 Steven Gerrard says he will always strive to improve as he approaches his 150th match as Rangers manager.

The former Liverpool captain will reach the milestone against Ross County on Saturday, with his side enjoying a 20-point lead in the Scottish Premiership.

"It's a journey I've enjoyed immensely," he said. "I'm certainly in a better place, from an individual point of view, from what I've learnt.

"I want to continue to push myself in all areas to become a better manager."

Gerrard was appointed in the summer of 2018 and the club are now closing in on their first title in a decade while also making it into the last 32 of the Europa League for the second season running.

"I knew walking into this job it wasn't going to be an overnight change, it was going to be a process," he added.

"I've been reluctant to mention targets but I was well aware of what was expected of me.

"Knowing it was going to take time and a certain amount of windows, that hasn't surprised me. It's played out exactly as I thought. We just need to remain focused on what we're trying to achieve."

Under contract until 2024, Gerrard described his first job in management as "really intense".

He said: "I'm really proud to have been manager here for 149 games and proud of the effort the players and support staff have given me. I hope there are many more to come.

"I'm looking forward very much to the future and pushing towards us being a successful group. That's the challenge for me and everyone at the club."

Gerrard confirmed midfielder Ryan Jack and striker Kemar Roofe could return against County at Ibrox, with midfielder Scott Arfield due back in early February.

Scotland's Jack has been out for two months with a knee injury, while Roofe has not played since limping off in the win over Celtic on 2 January.

"It's two really big boosts for us, two really important players," said Gerrard. "We've missed Jack. He's been a big player here and a big character. He's been ever so consistent."

Gerrard would not be drawn on any names but said Rangers were "making inroads" in terms of new signings.

The club have been linked with moves for Bournemouth pair Jack Simpson and Nnamdi Ofoborh.

"We are actively trying to improve the group come the summer," he said. "Recruitment never stops here. We're always looking to improve and evolve. We want to be a window or two windows ahead."

Hilarious History: You're Dead To Me returns with the fiercest woman in RomeCan Man United win the league?: Football Daily has all the latest as they regain top spot