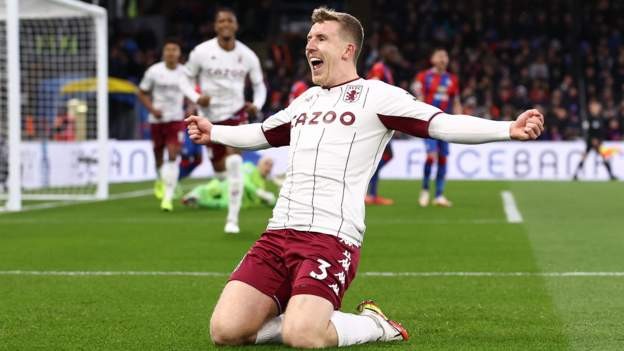 After wildly celebrating grabbing all three points late on against Brighton a week ago, the former Liverpool captain was again jubilant when Matt Targett put Villa ahead with a low drive through a crowd of bodies from Ashley Young's corner on 15 minutes.

As Palace tried to salvage something in the closing stages of the second half, John McGinn curled a beautiful shot into the top corner from the edge of the box to double the visitors' lead against the run of play.

Palace managed to snatch a late consolation through Marc Guehi in injury time but it was not enough to deny Villa.

The travelling Villa support were treated to a confident performance in bitterly cold conditions in south London, with McGinn, Ezri Konsa and Tyrone Mings all having chances for the visitors in the first half after Targett's opener.

Palace should have opened the scoring through Wilfried Zaha after the forward jinked past his marker on the edge of the Villa box but his left-footed effort was dragged just wide of the far post.

The Eagles saw a great opportunity to equalise after the break denied when referee Michael Salisbury blew his whistle for a foul by Marvelous Nakamba on Zaha and missed the advantage Christian Benteke and Conor Gallagher had created.

Villa almost played out the final quarter of the game with 10 men as substitute Douglas Luiz was shown a red card for a challenge on Cheikhou Kouyate, but it was downgraded to a yellow after Salisbury consulted the pitchside monitor.

The win moves Villa up into 11th place, level on points with Palace in 10th.

A new battle for Gerrard and Vieira

Gerrard said before the match that former Arsenal captain Vieira was one of his toughest opponents during his days marshalling the Liverpool midfield, and their first competitive meeting as managers was keenly anticipated.

Villa had only won once on the road this season - a 1-0 victory over Manchester United at Old Trafford in September - and although it was a nervy end to proceedings for Gerrard, his team were worthy winners.

Full-backs Matty Cash and Targett, plus Scotland midfielder McGinn, provided a constant threat for Villa, along with 36-year-old Young, who is now the oldest player to assist in consecutive Premier League games for the club.

For Vieira, one of his key tasks is surely to improve his side's ability to defend set-pieces. Targett's first-half strike was the 10th goal Palace have conceded from either a corner or a free-kick out of the 19 they have shipped in the league this season.

The Eagles will have to regroup now and hope Saturday's defeat was just a temporary blip on what has otherwise been an excellent home record this season.

Go to the Crystal Palace pageGo to the Aston Villa page

Marc Guéhi (Crystal Palace) wins a free kick in the attacking half.

Attempt missed. Christian Benteke (Crystal Palace) right footed shot from the right side of the six yard box misses to the right. Assisted by Joel Ward following a corner.

Jordan Ayew (Crystal Palace) wins a free kick in the defensive half.

Attempt missed. Jordan Ayew (Crystal Palace) right footed shot from outside the box is high and wide to the left. Assisted by Conor Gallagher.

Attempt saved. Odsonne Édouard (Crystal Palace) right footed shot from the centre of the box is saved in the bottom left corner. Assisted by Conor Gallagher.

Attempt saved. Christian Benteke (Crystal Palace) right footed shot from the centre of the box is saved in the top centre of the goal. Assisted by James Tomkins with a headed pass.

Douglas Luiz (Aston Villa) is shown the yellow card for a bad foul.