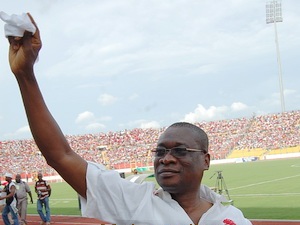 The Ghana League Clubs Association (GHALCA) is on the verge of reversing the one-year ban placed on Asante Kotoko, GHANAsoccernet.com understands.

The Ghana giants were banned for a year and slapped with a 10,000 Ghana cedi fine for snubbing the medal and trophy presentation ceremony during the 2011 Presidentâ€™s Cup on July 1.

This development follows extensive meetings between officials of the welfare body and the executive chairman of Kotoko Dr. KK Sarpong on Monday.

Discussions between the two parties were said to be such a success much that GHALCA are leaning towards dropping the ban element of the sanctions placed on the Kumasi-based club.

Dr. Sarpong who was out of the country when the shameful incident took place at the Accra Sports Stadium has been largely credited for the latest turn of events.

A Press release from GHALCA to make the intended decision official is expected in a couple of days.