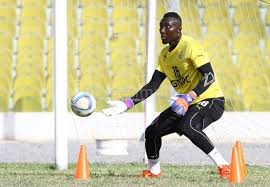 Ghana international goalkeeper, Richard Ofori, is attracting interest from South African clubs and will be assessing his options in the upcoming weeks.

Ofori who is currently with the national team of Ghana at the Africa Cup of Nations in Gabon, has received offers from a number of PSL clubs.

The best keeper in the Ghana Premier League was recently in Mzansi and attended training at Cape Town City, under coach Eric Tinkler and his technical team.

The player’s representative in South Africa Thembela ‘Tera’ Maliwa has provided an update on the interest in the shot-stopper.

“Yes, there is one or two local teams interested in him. There is one First Division club interested," Thembela ‘Tera’ Maliwa told Soccer Laduma.

"But we haven’t decided on anything at the moment. We want Richard to focus on the AFCON. Later, we will know his new home.

Remember, he is the current Ghana Premier League Goalkeeper of the Year. He has won the award for two seasons in a row. He is ready to leave Wa All Stars if he gets a good offer,” Maliwa added.

Ofori will be hoping to update his CV by winning the Africa Cup of Nations title following his success in the Ghana Premier League with Wa All Stars last season.