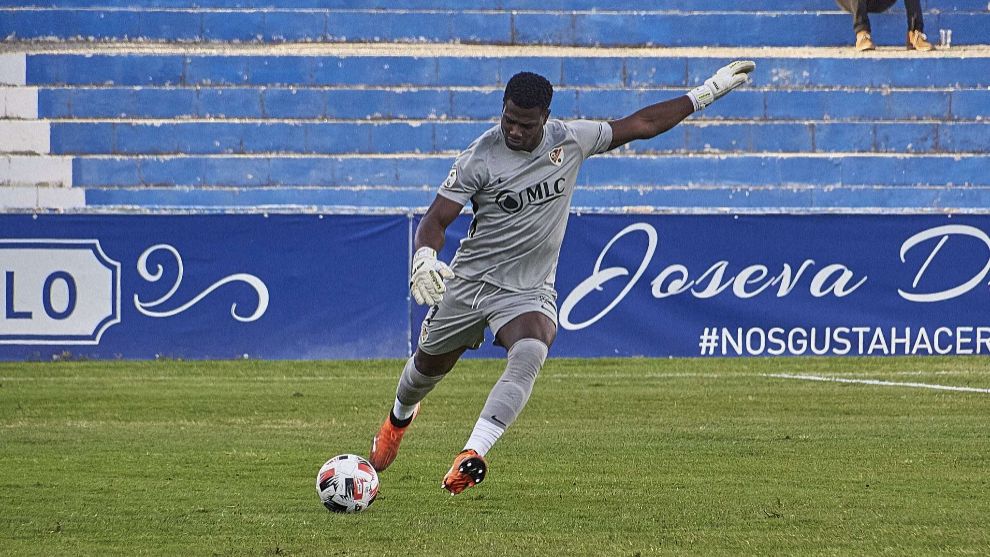 In Ghana hides talents that come to dazzle in the world of football. This week in our Bronze story we have to talk about one of them. Razak Brimah (Acra, Ghana, 1987) is a goalkeeper for Linares Deportivo, a team that competes in Second B, but to reach that point the goal has had to overcome many barriers.

One of the moments that marked his career was when a scout from the Poli Ejido discovered him in Germany: "It all started in Wolfsburg , in an Academy I came to from Ghana, they saw me and signed me. It was for the Poli Ejido. Then I arrived I went to Spain and due to paper problems, I was in Portugal for two years, at the age of 18, very young . "

A boy who fulfilled his dream of being a footballer from his native Ghana and who always had the support of his family. "My mother was a seamstress and did athletics as a hobby. I will be very grateful to her all my life. When I went to Germany, she was very sad, she supported me a lot, along with my uncle. My mother told me not to forget where I come from, it is what I do until now ", points Razak to MARCA.

His uncle, his best scout

"My first memory of soccer was in my neighborhood. I always skipped class to play soccer. My mother didn't know it, I was 8 years old. One day my uncle saw me and I came home with dirty clothes ... my uncle He told my mother that he played quite well and from that day on he has always supported me. I can say that thanks to my uncle, who has passed away, I am where I am. They are two people who are fundamental in my career, "adds the Linares goalkeeper.

A short period in Portugal and 10 years in Spain were enough to win the hearts of many fans. After his assignments at Chaves and Unión de Madeira, Razak arrived in Spain and Ejido, Betis or Tenerife continued to form a raw pearl. "I arrived in Ejido and I remember that we scored five against Villarreal in the Cup. From there I went to Betis B and my substitute was Adrián, who is now in Liverpool. I was also able to be in the first team with Pepe Mel. It was the year that he joined First and I shared a dressing room with Rubén Castro, Jorge Molina ... ", adds Razak.

Without many opportunities, but at 23 he learned a lot from his peers: "It was an incredible year. Arzu, Cañas, Emaná, Castro, Molina ... there were people who only learned from living with them day by day. I will not forget a talk. with Arzu who told me that life is very short and that you have to take advantage of any moment in football. You have to know how to separate your personal life with football. "

The importance of Carlos Terrazas

In Tenerife Razak arrived to compete with Sergio Aragoneses and ended up going to a Guadalajara that would suffer defaults and an administrative decline: "I had a two-year contract in Tenerife, but I was competing with a great goalkeeper, Sergio Aragoneses. I didn't end up playing much and I left. to Guadalajara. They were last at Christmas and we saved the team. My debut was against Numancia and winning 5-1. That was the year in which they dropped us economically ... We had a very bad time, we had many level players. "

The stage in Guadalajara with Carlos Terrazas made him mature beyond football and Razak headed to Córdoba to gain momentum and reach Second with Mirandés: "Carlos Terrazas went to Mirandés and that year he called me . Someone who has helped me If he asks for my hand and I give him head, and that's Terrazas ".

Razak arrived at the 2015 Africa Cup as the goalkeeper of his national team. A moment that he will always remember even though he did not take the title. A historic final that reached the penalty shoot-out against Ivory Coast and in the 18th shot Razak was in charge of launching: " I missed the decisive penalty and it was very tough . That year we beat South Africa, Nigeria, semi-final against Equatorial Guinea. .. It might be one of the worst moments in my career. We got to the hotel, I spoke with my mother and she told me that worse things have happened, that there were people worse than me. "

After a brief stage in Córdoba with a playoffs for promotion to First Division against Girona , our Bronze protagonist headed to South Africa after 10 years in Spain : "I wanted to try something new. LaLiga there and the team spoke to me very well, the The truth is that he is super professional, I did not expect it . The team is like Madrid or Barça there. After an injury I was left without a team in 2019 and I did not play for up to 18 months and when I recovered, Linares Deportivo called me in Third. Logroñés also called me that year, I decided to stay here. "

From that time in South Africa, Razak remembers with special affection a friendly match against Barça. This is how he explains it to MARCA : "With my team we played against Barça, after the game I saw Iniesta walking barefoot on the pitch. I'll stay with that conversation, it was a very special moment, very humble. He's a 10-year-old guy."

On Linares Deportivo , his current team in Second B and with which he has risen from Third: "The truth is that the club is very familiar, humble, hard-working. It's nice to play here. Miguel Linares, sports director, president, coach ... they are very hard-working people. The club is humble, but it pays at the end of the month and that is very important. "

Black goalkeeper with a huge heart. Razak explains an episode of racism, but his words show little importance that he wants to give the matter. "I did have something, at first I had a lot of insults for racism, they even threw bananas at me ... and after many years in Europe I understood that people go to football to vent. From then on I realized that the less I pay them do better. Thank God lately it's not like it used to be, I hope that no more happens from now on. "

In Segunda B we see this season black goalkeepers such as Badiashile de Las Rozas or Mapisa del Zamora. "I'm so glad you've ever goalkeepers black. I honestly think we are better than white goalkeepers. There are those who fail more than we do . We are improving and we are becoming more. Before it was Kameni and little more ... Me It makes a lot of it that black goalkeepers are titled ", he affirms to MARCA.

Adjei , Ghana goalkeeper , who is remembered for that U20 World Cup final between Ghana and Spain by Casillas or Xavi.

Buffon : "I like him a lot. He is a goalkeeper who is always attentive and focused."

"I liked Santi Cañizares a lot as Spaniards and then a lot, a lot Sergio Asenjo, Villarreal goalkeeper. And from Second B I really like Isma Falcón, he was my partner in Córdoba. Razak concludes .

Although his biggest idols are at home: "My son Nasser and my daughter Atu . They are my life."