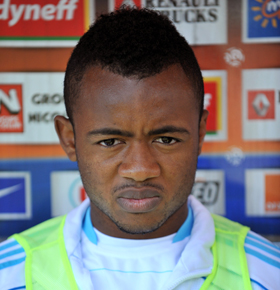 Ghana striker Jordan Ayew will seal a deal to join French side Nice on a season-long loan deal on Monday, MTNFootball.com can exclusively reveal.

The Marseille attacker is expected to sign the contract in the morning before flying out to join the Black Stars for Saturdayâ€™s Nations Cup qualifier against Malawi.

Reading and fellow Ligue 1 club Brest were both reported to be tracking the 20-year-old striker, who is the son of former Ghana international skipper Abedi Pele.

But with the English transfer window closing on Friday, insiders have revealed that he will rather join Nice to boost his chances of playing regularly.

Ayew joined Marseille as a trainee in 2006 and broke into the first XI last season, scoring seven goals in 34 appearances for the club.

However, the player is not thought to be in the plans of new Marseille boss Elie Baup and Ayew is wants to move onto pastures new.

Nice are keen on Ayew, who possesses power and pace, and could get more playing time there.

The youngster is under contract with Marseille until June 2015.

The French transfer window will close on Tuesday at midnight.

He has so far made three appearances for Marseille this season.