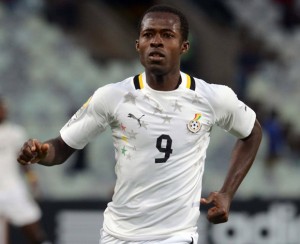 Siedu Bansey earned the penalty for Ghana in their 1-0 win over Ethiopia.

Ghana advanced to the quarter-final of the 2014 African Nations Championship on Tuesday night after a 1-0 win over Ethiopia to finish top in Group C on Tuesday.Â

The Local Black Stars progressed from the Group with Libya who drew 2-2 with Congo in Polokwane.

The Local Black Stars without four regulars in the starting line-up were second best against the Walias.

Ghana were out of their blocks early with a free-kick which was whipped in and with goalkeeper Alula Girma committed, Siedu Banseyâ€™s header on three minutes went wide.

The Ethiopians switched on their attack but an attempt from long range was easily grabbed by Stephen Adams.

In the 14th minute, Bansey was fouled from 20-yards but Michael Akuffo skied his effort.

From there, Ghana made a bright attempt at goal but winger Abdul Latif Mohammed could not finish off a move.

The AshantiGold winger stole a ball and burst into the box and with goalkeeperÂ Alula Girma off his line, he amazingly shot wide.

Adaneâ€™s powerful shot at goal deflected off Nuru Sulley for a corner-kick.

The resultant kick nearly opened the scoring but Adams was alert to punch away on the line.

Striker Omod, left unmarked inside the box, saw his blistering header go wide in one of Ethiopiaâ€™s attacking moment.

Adane tried with a superb bicycle kick inside the box but it missed the target narrowly.

Ghana had their back to the wall and were lucky to have gone into the break with the score line barren.

Konaduâ€™s side need just a point stabilized their game in the second period but it was Ethiopia who created scoring opportunities.

One of Ghanaâ€™s rare attacking moves earned them a penalty when Bansey was felled inside the box.

Referee Gehad Grisha pointed to the spot and centre-back was excellent with his delivery.

Ghana will now face the runners-up from Group D in the quarter-final on 25 January.

What do you make of the Local Black Stars performance against Ethiopia? Were you happy with the side's showing today? What do you think should be done in Ghana's subsequent matches?