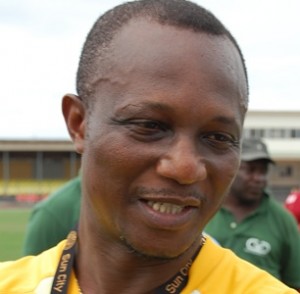 Newly appointed Ghana coach Kwesi Appiah insists he is not under pressure to deliver an African title for the country.

The 51-year-old sealed a two-year renewable mandate with the Ghana Federation on Tuesday to take full charge of the team ahead of two impending international tournaments.

The Black Stars will be heavily involved in the qualifiers for the 2013 African Cup of Nations in South Africa and crucially the 2014 World cup qualifying campaign.

Ghana could only manage a fourth-placed berth at the 2012 African Cup of Nations despite been touted as one of the huge favourite to clinch the title and there are many who believe he will be under incessant pressure to deliver the title for the West African powerhouse in less than a year.

But the ex-Asante Kotoko defender has watered down on such fears.

â€œI believe that when youâ€™re given the job, you get down to business and put in your best and you wait for a positive outcome,â€

Appiah and his backroom staff will hit the ground quickly ahead of the 2014 World Cup qualifier against minnows Lesotho in Accra.