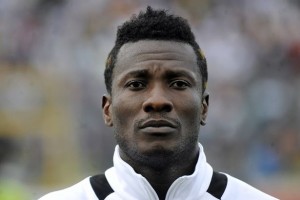 UniBank Ghana Limited, the official bank of the Black Stars, has struck a two-year deal with Black Starsâ€™ captain, Asamoah Gyan, as its brand icon.

Gyan, who led the Black Stars to their third successive World Cup qualification, would for the next two years, promote the products and services of the bank.

The lethal striker, as per the terms of the deal, would appear on both print and electronic advertising media of the bank, as well as endorse the uniBank brand in and outside the country.

The bank would also make annual financial commitments to the player as part of the deal.

UniBankâ€™s recent association with the player has further strengthened their relationship with the Ghana Football Association (GFA), after entering into a 1.2 million dollar sponsorship deal with the football controlling body late last year.

The bank is expected to play a major role in the campaign of the Black Stars at the 2014 Federation of International Football Association (FIFA) World Cup in Brazil.

Ghana has been drawn in group G alongside Germany, Portugal and USA.