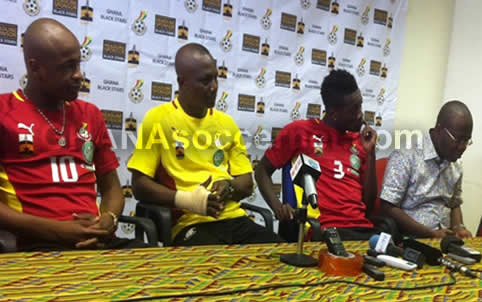 Akwasi Appiah spotting his right-hand strapping in a press conference

The Black Stars coach has been spotting a bandage strapping on his right hand in recent times even though his health is believed to be intact.

Many have therefore made several interpretations including superstition to Appiahâ€™s heavily strapped right hand.

The ex Ghana captain is however remaining coy on the mysterious subject after he was asked about it during the post-match press conference after the emphatic 6-1 win over Egypt on Tuesday.

The Black Stars coach took some time to gather his thoughts after the question was posed and said: â€œOK, I wonâ€™t tell you,â€ amidst sarcastic laughter.

He then took off the bandage and threw it into the scrambling assembled media â€“ perhaps to prove there is nothing superstitious about it.