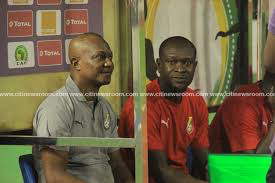 Akonnor succeeded Appiah as Ghana coach in January 2020, having worked as his assistant at the start of the qualifiers in November 2019.

After Ghana’s comfortable 3-1 win over São Tomé in the final AFCON qualifier in Accra, the ex-Ghana captain thanked Kwesi Appiah for beginning the journey that ended successfully on Sunday.

“I would like to first of all thank my former boss Kwasi Appiah who started the qualifiers winning two games, he’s the reason why we just needed to win one and draw to make it and I want to acknowledge him for everything,” he said after the game.

Nicholas Opoku met a perfect Mohammed Kudus corner to open the scoring for the four times African champions before Jordan Ayew doubled the lead from the sport.

Mohammed Kudus combined with Baba Rahman in the second half as the latter scored his first goal for the country.

The visitors pulled one back after a Razak Abalora howler saw Fernandez Carlvaho reduce the deficit.