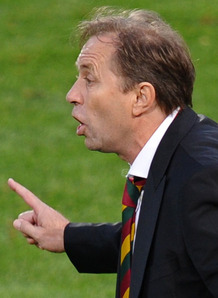 Ghana coach Milovan Rajevac is keen on staying to continue his â€œvision for the Black Starsâ€ despite several offers from clubs and countries, his agent has revealed.

This is the first hint that the Serbian manager wants to stay to coach Ghana since their participation in the World Cup ended last week.

Rajevac has become one of the most sought after coaches in the world after leading the less-fancied West Africans to reach the quarter finals of the World Cup.

Qatari side Al Sadd has made a huge offer and several others clubs from Russia, Belgium and France have all made contacts to sign the coach whose contract with Ghana ends next month.

Struggling Nigeria, who are overhauling their football are also keen for Rajevac to lead their revolution, while star-studded Ivory Coast are also believed to be interested in him.

But the Serbian coachâ€™s agent Goran Milovanovic insists that the Black Stars remain first priority as he wants to continue to work in the country he loves.

â€œIt is the truth that coach Milo has had several offers right across the world but he has refused to talk to anyone because of Ghana,â€ Milovanovic told Ghanasoccernet.com.

â€œCoach has real love for Ghana and wants to continue his vision for the country so that football in the whole country can grow and challenge the established world team like Brazil, Argentina, Germany and the rest.

â€œHis contract expires at the end of August but because he wants to stay he will not talk to any country or clubs who have approached him and only wants to talk to the Ghana FA.

With the lucrative offers for the Serbian coach, his agent says Rajevac money wonâ€™t be his consideration when negotiating the new deal with Ghana.

â€œI donâ€™t think there is a major stumbling block we just have to sit down in two weeksâ€™ time and agree on the details of the new contract,â€ the agent said.

â€œMoney wonâ€™t be the consideration as job satisfaction is his priority otherwise he would have gone somewhere else. We will sit down with the Ghana FA and reach a fair deal.â€

Rajevac, during his stay as Ghana coach, helped the Black Stars to qualify for the ongoing World Cup with cheeky ease, even with two matches to spare â€“ the first time in the countryâ€™s history.

In his first year he guided the local Black Stars to reach the final of the African Nations Champions (CHAN). Earlier this year Rajevac, missing eight key players, guided a youthful Black Stars team to win silver behind the mighty Egypt at the Angola Africa Cup of Nations tournament.

At the World Cup proper, which is ongoing, he has also guided the Black Stars to equal Cameroon and Senegal's record by becoming the third African country to reach the quarter finals.

Rajevac is among the lowest earning coaches at the World Cup and despite his low salary as compared to other coaches he was able to steer the Black Stars to the last eight.

Coaches like Fabio Capello of England, Marcello Lippi of Italy, Javier Aguirre of Mexico, Ivory Coastâ€™s Sven Goran Eriksson and Lars Lagerback of Nigeria who earn millions and have star players bombed out in early in the tournament in South Africa.

List of salary of World Cup coaches and their performances