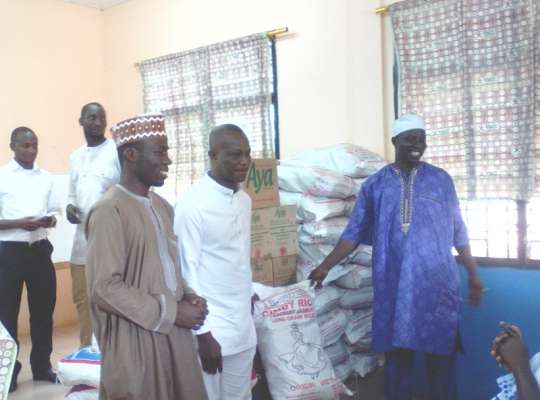 Black Stars had coach Kwasi Appiah on Friday donated utems worth hundreds of cedis to the Widows and Widowers Foundation at Nima in Accra.

The items which included bags of rice, boxes of oil and Voltic Mineral Water were given to the foundation as part of the coach's Social Responsibility drive.

The donation, estimated at GH¢10,000.00 was meant to mitigate the hardships the deprived in society.

“This is something that has been on my heart, to support widows and I’ll be doing this from time to time. I’ve been doing similar things in the Brong Ahafo region, but this is my first time here and I won’t end it now,” Appiah said after the donation.

“We are very grateful for this kind gesture. The coach has put smiles on the faces of the widows,” the Secretary of the foundation Abdul Razak Issah said, thinking the coach for his gesture.

Appiah has been supporting countless number of brilliant and needy students as well as widows and widowers in the Brong Ahafo Region where he was born and has decided to extend his benevolence to other parts of the country.