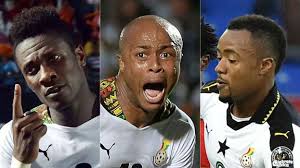 Ghana coach Kwesi Appiah has revealed that he will recall the trio of Andre Ayew, Jordan Ayew and Asamoah Gyan for future matches of the Black Stars.

Appiah has explained why he left out three key players for the 2019 Africa Cup of Nations qualifier against Kenya that the Black Stars surprisingly lost 1-0 on Saturday.

Even before the Black Stars lost the match to the Kenyans on Saturday, coach Appiah revealed that leaving out the three top players Saturday’s Afcon qualifier would give him the chance to see other talents for the country.

Appiah said on Friday that the three players will be recalled to the Black Stars but he needs to give the chance to other players on periphery of the squad.

The three players did not make Black Stars’ squad for the fixture set for Kasarani Stadium and Appiah did not mince his words when asked why they are not part of the travelling party.

“I have good players, who are capable of doing a good job. It is the time for other young players to show what they can do even for future matches,” Appiah said in Kenya.

“We have a lot of players in Ghana and I am working to understand and know them well.

“It does not mean that the door is closed for the three players, or any other player left out…no, only that we are also giving a chance to others so that we can evaluate the depth and quality of players we have in Ghana.

"We are just trying the new players and that does not mean those left out are not part of us.

Despite missing the aforementioned stars, coach Appiah is still confident that they will get a positive result.

“I have good players in my squad, who can do the job so we are not worried. We have to take our chances and defend well because we are playing away from home.”

Ghana started her campaign on a high note, after defeating Ethiopia 5-0. A brace from Raphael Dwamena and goals apiece from Gyan, Ebenezer Ofori and Boye were enough to hand Walya Antelopes a lesson.

The Black Stars will be aiming at getting maximum points against their hosts Kenya, who went down 2-1 away to Sierra Leone in their opener.