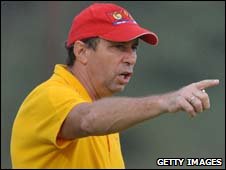 Ghana coach Milovan Rajevac says he is satisfied with the performance of his charges despite a 1-0 defeat to South Africa on Wednesday night in Johannesburg.

The Serbian trainer fielded three players who missed the 2010 Fifa World Cup finals in his starting line-up and capped duo Bright Addai and Cofie Bekoe with second half appearances.

Daniel Agyei replaced first choice goalkeeper Richard Kingson, who suffered pains in his right eye, after a goal-bound strike hit him in the face.

Rajevac admits inexperience denied his side a favourable result in the friendly match.

"Our team is young. You saw that we conceeded goal when one player was outside so it is still an inexperienced team but afterall I'm satisfied with the boys. We came with a young team here and Bafana Bafana played very well and deserved victory. They were very motivated in this match," Rajevac said in a post match interview.

Ghana's next assignment will be in Swaziland next month for the commencement of the 2012 Africa Cup of Nations to be co-hosted by Gabon and Equatorial Guinea.