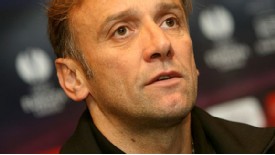 Goran Stevanovic maintained his impressive 100 per cent record as the Black Stars coachÂ  after supervising Sunday's 3-0 win over Congo on Sunday.

The Black Stars dispatched with Congolese with aplomb and style as they played eye-catching football to win the game emphatically in Brazzaville.

The Serb took charge of his second assignment in three months after masterminding a 4-1 victory against Togo last month in an international friendly.

Stevanovic is fulfilling his promise of an attacking football strategy which has seen the Black Stars score seven goals in two matches.

The 44-year-old will receive further endorsement and will flaunt his credentials if the Fifa World Cup quarter-finalists beat England in an international friendly on Tuesday.

He took over from compatriot Milovan Rajevac who guided Ghana to the last eight of the World Cup but was loathed for his defensive strategy.

"For me now, my first start is to motivate players to do things better because they achieved so much," Stevanovic said when he took charge of the team.

"Now my biggest challenge is to let the players believe in themselves because I'm sure we have not reached the zenith and we can do better."

Stevanovic will take charge of his third game when they play England on Tuesday.