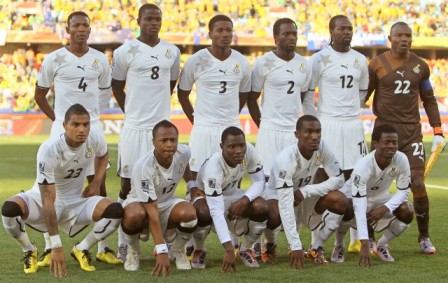 Ghana coach Goran Stevanovic will make a raft of changes to his starting line-up to face Nigeria in a friendly in London on Tuesday.

The Serbian tactician wants to give the opportunity to some fringe players to impressÂ  in the match against the Super Eagles.

"I need to give the chance to some of the players who have had less playing time with the team," Stevanovic said.

Newboys Masahudu Alhassan and Mohammed Abu could be given their first starts in the game to be played at Watford.

Strikers Prince Tagoe, Albert Adomah and Dominic Aidiyiah were also among the players the Serbian spent most time with in Monday's training.

Others who could benefit are Quincy Owusu-Abeyie who is making his return to the team after a one-year absence.

But the other top players like Asamoah Gyan, Derek Boateng, Sulley Muntari, John Mensah, Isaac Vorsah and John Pantsil could be given the chance to play.

The Serbian coach is widening the pool of players he can call on to serve the Black Stars.