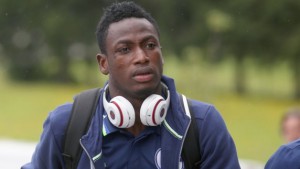 Ghana defender Abdul Baba Rahman has reunited with former coach Markus Weinzierl at Schalke after joining the club on loan from Chelsea.

The 22-year-old has made the switch to the Veltins on a season-long loan after failing to impress new Chelsea manager Antonio Conte.

The Ghana international joined in a deal worth up to £21.7million from Augsburg last August, but started only 11 matches.

Antonio Conte rates the Ghana left-back, but feels he would develop quicker playing regularly for Schalke in the Bundesliga.

It's an all-familiar territory for the Black Stars left-back as he reunites with former Augsburg coach Markus Weinzierl.

Rahman excelled heavily under the German during his spell at the club, before making the big money move to England.