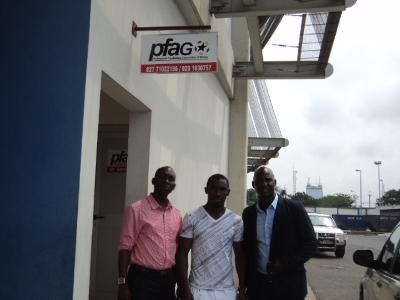 Ghana defender Lee Addy has utterly rejected accusations by Red Star Belgrade that he has refused to report for pre-season training insisting he will clear his name at Fifa.

The 20-year-old has vowed his commitment to the Serbian giants despite an official complaint lodged against him at Fifa by the club.

The centre-back has produced medical records to show that he has been hospitalized for more than two weeks after contracting malaria.

The misunderstanding with Red Stars resulted in the Serbian club reporting him to Fifa on Tuesday with the Serbian media piling accusations on the player.

Addy has vowed to clear his name at Fifa and with Red Star coaches and fans after â€˜disparaging statementsâ€™ were made against him over the past few days.

According to several reports in the Serbian media on Wednesday, Addy has travelled to Holland to seek a move to one of the top clubs in the country.

Despite his obvious frailty, the defender visited GHANAsoccernet.com offices in Accra on Wednesday to prove that he is still in Ghana and he is not well.

The centre-back moved to produce medical records showing insisting that the illness event prevented him from Ghana during the All African Games qualifier against Nigeria over the weekend.

â€œIt has shocked me that this action has been taken against me by my club officials. If I had been fit as they claim I would have played for Ghana at the weekend,â€ Addy told GHANAsoccernet.com.

â€œAs you can see I am very weak and that was the reason why I could not play for my countryâ€™s U23 team in that important game.

â€œIt is pathetic that they have even said in the Serbian papers that I have travelled to Holland. That is utterly false.

â€œThatâ€™s why I have come here to prove that I am still in Ghana but I am not well and down with malaria.

â€œI know some club officials have told the media some inaccurate information which has been spread in the Serbian media as if I am not loyal to the club.

â€œI want to assure fans of Red Stars Belgrade, my coach Mr. Prosinescki, the clubâ€™s management and Serbia sports fraternity that I am seriously ill.

â€œTo fans of Red Star and my team-mates and my coach, I want to assure you that I am 200% committed to the club and will not do anything untoward against the club I hold dearly.

â€œI have already furnished my club with all the medical reports showing that I am ill and doctors have given me advice to recover from the malaria before I travel.

â€œI am ready to go anywhere including Fifa to prove my innocence in this matter.

â€œAs soon as I am given the go-ahead to travel by my doctors in Ghana I will promptly join my team-mates in pre-season.â€

Meanwhile, the Professional Football Association of Ghana (PFAG), the Fifpro affiliate in Ghana, summoned the player to their offices in Accra on Wednesday afternoon to hear his side of the story.

The PFAG, which is part of the world playersâ€™ union, General Secretary Tony Baffoe received all the medical records following Addyâ€™s recent ailment and a report will be sent to Fifa.

The PFAG will compile a report to Fifa over the complaint made by Red Star to the world governing body.