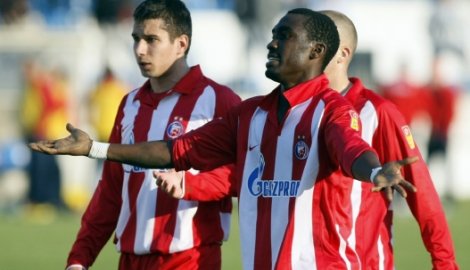 Ghana defender Lee Addy has been given a deadline of midnight on Monday to join his Serbian club Red Star or face disciplinary action at Fifa and Uefa.

The former Berekum Chelsea star has not returned for pre-season in Belgrade despite concluding his international assignments.

Addy was part of the Black Stars that played in the matches against Congo and South Korea and was expected to have rejoined his team-mates two weeks ago.

The central defender has refused to answer several calls from the coach and legend of the club Robert Proscineski since he failed to turn up.

The only Red Star official who was able to reach the Ghanaian is team manager Mirko Abramovich who had called the player for seven days before reaching him.

Addy told Abramovich that he has been struck down by malaria but since last week club officials have not heard from him which prompted their decision to take disciplinary action against him.

"Addy simply does not answer the calls he get from Red Star officials," Sports Director of Red Star Ivan Adzic said.

"The only one who was able to maintain contact with him, after seven days of trying, is the team manager Mirko Abramovich.

"He pointed out to him that he should appear at the club no later than 27 June and since then there has been no sign of them Addy.

"Therefore we are waiting until Monday. If he does not appear in Belgrade we will send a disciplinary complaint UEFA and FIFA,'' Adzic added.

After several disciplinary issues with late arrival from national team matches, Red Star are skeptical about Addy claims of contracting malaria insisting the club can treat him.

''He's a pro and should know that all these issues can only be detrimental to his career," Adzic said.

"We could provide that treatment of malaria in Belgrade, but he did not give us a chance, since it does not answer our calls.''

Addy was banished to the club's reserves after failing to arrive early from the Ghana-England friendly at Wembley in March.