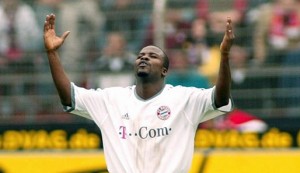 Ex-Ghana defender Samuel Osei Kuffuor has finally bowed down to reality by admitting that his playing career has ended.

But Kuffuor doggedly slammed the report claiming he was eyeing moves to the United States or the Middle East before he hangs his boots.

Since then the former Champions League winner has not played for any club with a proposed deal to end his career with Asante Kotoko failing to materialise.

Now Kuffuor has admitted that he will not be taking to the field again as he wants to concentrate on his family. â€œMy mind is tired, my body is tired, there is time for everything. You donâ€™t need to force yourself to do things you are not capable of doing anymore,â€ Kuffuor said.

â€œI have been in the system for 18 years and I think it is enough. It is time for me to just concentrate on my family.â€

The 34-year-old, who won several titles with the German giants, has struggled since leaving the club in 2005 to return to Italy by signing for Roma.

Kuffuor failed to impress at Roma and was sent out on loan to Livorno and Ajax, who both refused to give him a permanent deal.

The former Ghana international has decided to call time on his career following the recent disappointments.

His agent Guiseppe Dello Russo: "He did decline offers from Bundesliga and 2nd Bundesliga. He said he wanted to end his career. I am very sad."

Kuffuor was relased by Dutch giants Ajax in June after just six months on loan at the club.

Russo blamed Ajax coachÂ Marco van BastenÂ for the club's decision not to hand him a permanent deal.

"He wanted to leave there asap. He was unfortunate at Ajax," Russo added.

Kuffour spent 11 seasons with Bayern, raising from the youth teams to be a prominent first-squad member who lifted theÂ UEFA Champions LeagueÂ with the club.

He was an integral part of the Bayern squad that won the 2000-01 Champions League, also scoring the winning goal in theÂ 2001 Intercontinental Cup, being subsequently named man of the match.