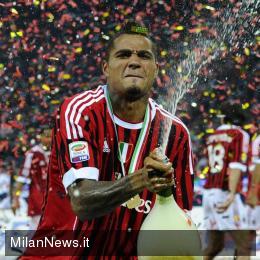 AC Milan midfielder Kevin-Prince Boateng has been dropped from Ghana's squad to face Nigeria in a friendly next month, GHANAsoccernet.com can exclusively reveal.

In the latest twist in his suspicious attitude towards Black Stars call-ups, the midfielder claims he is recovering from surgery, investigations have revealed.

But this flies in the face of the fact that he played for AC Milan in Wednesday's a friendly against Solbiatese.

Now Ghana FA authorities suspect that closer to the game on 9th August, Boateng will say he is not available for the game in London next month.

Fed-up Black Stars coach Goran Stevanovic has now axed Boateng from the squad while a new player will be considered in his position, insiders have told GHANAsoccernet.com.

This comes after Boateng flopped in the Black Stars clash against Congo in Kumasi few weeks ago and opted out of the trip to South Korea for a friendly claiming he was tired.

The latest revelation adds to a catalogue of Ghana matches Boateng has missed for suspicious reasons.

He suffered a massive public backlash in March when he refused to turn for the crucial Nations Cup qualifier against Congo away in Brrazzaville.

But two days later he presented himself to play in the high-profile Ghana-England friendly which sparked fury among Black Stars players.

He was snubbed by team officials who suspected he was picking and choosing the matches he wants to play for the Black Stars.

The latest revelation will do little to endear him to Ghanaians who feel used by the German-born player whose dwindling career was rescued by his association with the Black Stars last year.

He was sacked from the German youth national team for indiscipline and was offloaded by Tottenham for non-performance before he secured a switch to the then struggling Portsmouth.

His career was saved when he secured a nationality switch to play for Ghana at the 2010 World Cup and got the move to AC Milan after the Black Stars excelled at the tournament in South Africa.

Already Ghanaians, including some popular pundits are alluding to the fact that he opted for Ghana only to market himself at the World Cup.