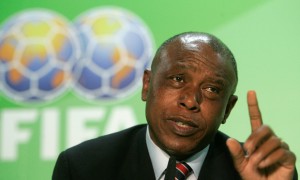 The 62-year-old was in Accra to canvass votes from members of the West Africa Football Union zone B.

But the Ghana FA boss Kwesi Nyantakyi has dismissed any chances of the ex-prisoner, saying 'sleeping in the same prison room with Nelson Mandela is not enough to win the FIFA presidency'.

“We have listened to all the candidates and we know what each of them is bringing on board and who shares in our vision," he told Accra-based Happy FM

“You can read from them that some are very serious about their bid and others are just walking through..just like Tokyo Sexwale”.

“As for Sexwale, I can say I’m even experienced and competent than him."

Sexwale’s varied credentials include being a current Fifa anti-racism adviser, a former prisoner on Robben Island alongside Nelson Mandela, and the previous host of South Africa’s version of The Apprentice television show.

He is also a hugely successful businessman with interests in the mining and energy sectors, and whose wealth has been estimated at £130m.