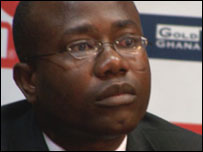 The Ghana Football Association (GFA) has lashed out at a media report claiming that the governing body has mismanaged US$6.6m, suspecting that â€˜mischievousâ€™ dirt is being dug up as the bodyâ€™s general elections approaches.

A report carried out in some local newspapers this week claimed that some officials of the GFA have been indicted over the sum of money over a period.

The report in the media also alleged that an audit report concluded that some disbursements were not acknowledged by the GFAâ€™s accounts. However, the GFA boss Kwesi Nyantakyi strongly rubbished suggestions of "lapses in internal controls over cash management, improper management of assets, unaccounted impress, payments without receipts, among other things" as reported by the media.

According to Nyantakyi, the financial report has not indicted any official of the GFA insisting that the question raised in the audit report has been fully addressed. "The report does not indict anybody for fraud. These are procedural errors for accounting,â€ Nynatakyi said.

â€œWhen you take money from the Association as impress, you are given a certain number of days to retire the impress after the event has occurred.

â€œAnd if you don't, that money is maybe debited to you as personal debt that you owe the Association.

"It does not under any circumstances impute corruption or fraud because first of all, there is approval for it and everybody knew that you were given the money to undertake a stated approved business of the Association.

â€œSecondly you are supposed to retire the impress at a certain time failing which you may incur some financial liabilities for that but it does not in any way suggest corruption or fraud," the FA President explained.

Meanwhile assistant GFA boss Fred Pappoe has descended heavily on claims from certain quarters that World Cup funds were embezzled by the federation.

Pappoe insists all the monies spent on the Black Stars at the tournament in South Africa last month was done by the Ministry of Sport officials.

â€œWe did not have any control of the money at the as the sports ministry officials undertook these tasks themselves,â€ Pappoe said.

â€œIt doesnâ€™t make that that when I am not given any money I am asked to account for it. It is mischievous that these claims are still being bandied about to deceived people. The people of Ghana know better.â€

GFAâ€™s general elections will be held next year and some interested parties have started campaigning for the post of the president.

Campaigning for GFAâ€™s top post has in the past been characterized by accusations of corruption and counter-accusations.