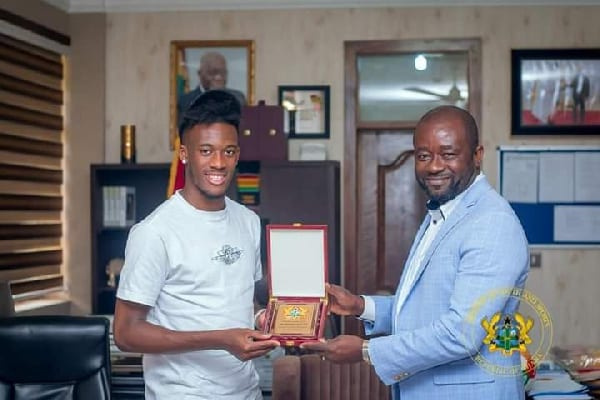 The Ghana Football Association is working with the country's political class to convince Chelsea midfielder Callum Hudson-Odoi to switch allegiance to the West African nation, the federation president has revealed.

Hudson-Odoi, whose father is a former Ghana international and a Hearts of Oak star Bismark Odoi, can switch nationality to play for the Black Stars despite playing for the England national team in recent times.

The talented winger has been a long-time target for Ghana for a nationality switch and with the country's President now ordering for the sports minister to start engaging the player, the hunt for the England star will truly take off.

The Chelsea star visited the country's leader in the company of his elder brother Bradley Hudson-Odoi and the Ghana Sports Minister Honourable Mustapha Usif at the seat of government called the Jubilee House.

“We’ve had discussions that have centered beyond even playing for Ghana, He has a crazy ambition of helping kids in this country, and we looking forward to working with Odoi, his entire family and many others who are very interested in representing their country," Okraku said

“There are loads of them who ply their trade beyond the shores of Ghana or were born not in Ghana but interested in representing Ghana.

Hudson-Odoi would be able to represent Ghana in the future because he has not played more than three matches for the England senior national team - this is according to new FIFA rules.

The matches he played for the England senior team were all before he turned 21 and would need to wait three years after his last call up by the Three Lions before he can make the switch to play for the Black stars.

Hudson-Odoi's last match for England was on November 17 in 2019 which means he could make the application for the nationality switch on the same date in 2022, which would be shortly before the 2022 World Cup gets underway.