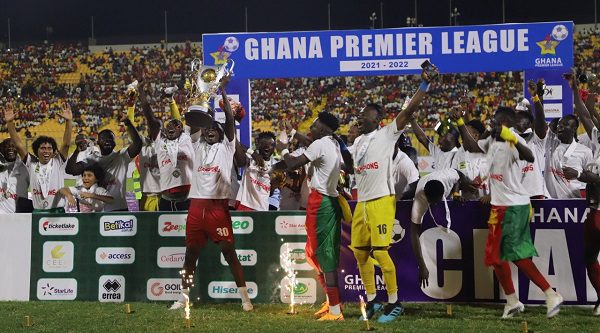 Asante Kotoko are the defending champions of the Ghana Premier League.

The Ghana Football Association (GFA) has confirmed the Premier League will resume this weekend after a four-week forced break.

This is after AshantiGold's injunction against the Ghana Premier League was dismissed by Accra Human Rights Court on Tuesday afternoon.

"Following the dismissal of the Application for injunction by AshantiGold SC against the Ghana Football Association, the Executive Council of the Association has decided that the betPawa Premier League should resume this weekend," the GFA wrote on their website.

"The Executive Council in their meeting after the court decision were of the view that the betPawa Premier League resumes immediately to avert further loss to stakeholders."

"The GFA has further engaged the betPawa Premier League clubs for the resumption of the season."

In her ruling, Judge Barbara Tetteh Charway stated that the Ghana Football Association (GFA) will suffer more than AshantiGold.

The Miners have also been ordered to pay GHS 20,000 in damages by the court.

Ashanti Gold suffered demotion to the third tier of Ghana football after being found guilty of match manipulation in the 2020-21 Ghana Premier League campaign.

According to a ruling by the Ghana FA Disciplinary Committee, AshantiGold manipulated the results of their matchday 34 match against Inter Allies FC.

President of the club, Kwaku Frimpong and CEO Emmanuel Frimpong were handed long-term bans for their involvement in the said match manipulation, as well as some players.

The Obuasi-based side appealed the Disciplinary Committee's decision to ban but the ruling was upheld by the Appeals Committee, forcing the Miners to take the case to the Human Rights High Court.