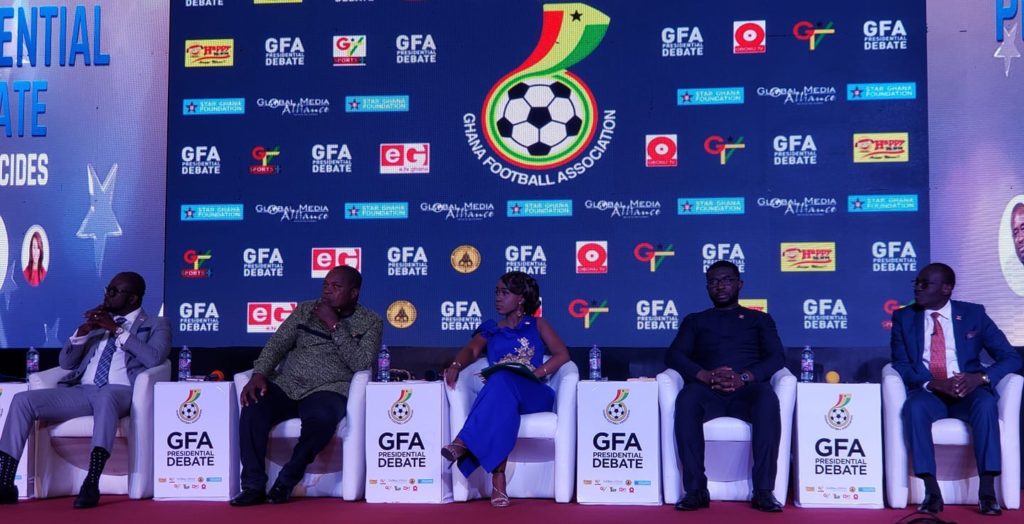 Five out of the six Ghana Football Association (GFA) presidential aspirants took turns to explain and argue their points out in running the GFA when given the nod in a presidential debate in Accra.

The one day debate without aspirant Mr George Afriyie, saw Madam Amanda Clinton, Mr Fred Pappoe, Mr Kurt Okraku, Nana Yaw Amponsah and Mr George Ankomah all taking turns to explain their mission and vision when they assume the high office of Ghana football on October 25, 2019, in the presidential elections.

In what seemed to be a night of idea sharing, all five aspirants admitted to the sorry state of Ghana football and took turns to address how to make the Ghana football attractive enough to court the attention of corporate bodies and sponsors, resourcing juvenile football and building them modern infrastructure to unearth and nurture their raw talents for the various national teams.

Mr Kurt Okraku, bankroller of Dreams FC and Mr Fred Pappoe, an experienced football administrator, agreed that aggressive marketing with a well resourced human force with required and well-structured procedures were the way forward for attracting sponsors on board as the current situation of Ghana football does not entice any sponsor.

Madam Clinton noted that though juvenile football was not completely dead in Ghana, there was the need to have a critical look at them for the brighter future of Ghana football.

“How can we look into the future without looking at colts and juvenile development, though it is not dead, we need to do more by developing them in infrastructure wise and linking them to education, where they could be monitored".

Nana Yaw Amponsah, adding to Madam Clinton's view on juvenile and colt football, said "his administration would focus among other things the provision of good pitches and infrastructure for the younger ones to thrive on.

“We need to also check age cheating, which has been one of the factors that has affected the development of Ghanaian players in the past, we need to link their school records to their colt and juvenile activities, which would be easy to ascertain the age of a player".

Mr Ankomah, who admitted that the female national senior team, the Black Queens have not had enough respect, said women football should be treated with equal attention as the male football and also called for stiffer punishments for people who intentionally or willingly fault in their duties in the promotion of Ghana football.

“In my administration, there would not be room for mediocrity, people would be made to face the full rigours of the law when they commit an offence.

“If a referee, a club or an administrator is caught engaging in bribery, it should be treated as a criminal offence and the necessary punishment must be meted out, to prevent others from doing same" he said.