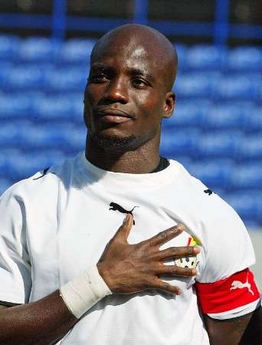 Ex-captain Stephen Appiah has been invited as the special guest of the Ghana Football Association for Tuesdayâ€™s historic friendly against England.

GFA boss Kwesi Nyantakyi ordered the inclusion of the Cesena midfielder as a member of the countryâ€™s delegation to the game at Wembley.

Appiah nearly broke down in tears when the GFA informed him of the decision.

The ex-captain of the Black Stars will join the GFAâ€™s delegation in London on Monday, a day before the match.

Appiah is revered in Ghana for his role in helping to revive the Black Stars team that wasÂ previously divided along factional lines.

He helped the country to qualify for their first two World Cups and Nyantakyi says those who serve the country whole-heartedly must be rewarded.

â€œAppiah has played a major role in what the Black Stars has become today and we think for his work for mother Ghana he must be part of this historic team,â€ Ghana FA boss Kwesi Nyantakyi said.

â€œThis will spur this generation and the next generations onÂ to serve their country sincerely for us to continue to have good results.

â€œAppiah is a hero for Ghana and Ghana recognises that.â€

The Cesena player was touched by the gesture of the Ghana FA boss and reveals he nearly broke down in tears.

â€œI received a call from the Ghana FA protocol director who announced to me that I am part of the GFAâ€™s delegation to England,â€ Appiah said.

â€œI was so moved by this big gesture from the GFA that I felt like crying. We only came to serve the people our country and I am touched that the people appreciate the service we gave them.

â€œI want to thank Mr Nyantakyi, Mr Fred Pappoe, my ex-Black Stars team-mates and the people of Ghana for giving me the opportunity.

â€œNow letâ€™s beat Congo on Sunday, defeat England on Tuesday and Ghana will continue to rise.â€

Ghana play Congo in the vital African Cup of Nations qualifier on Sunday before the game with England.