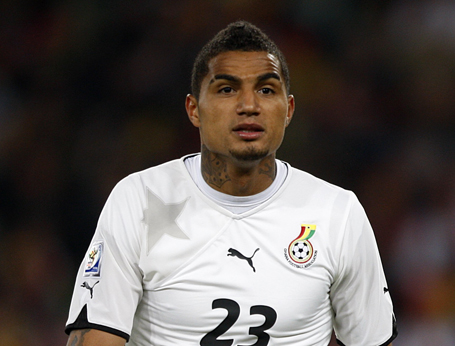 The Ghana Football Association (GFA) has opened investigations into the suspicious injury of Kevin Prince Boatengâ€™s that has ruled him out of the Black Stars vital African Cup of Nations qualifier against Congo.

The GFA is considering inviting AC Milan midfielder for further medical scrutiny by the Black Stars medical team to ascertain whether the player is truly injured.

The GFAâ€™s medical committee will examine on Thursday the pithy medical report presented by AC Milanâ€™s doctors over the suspicious injury.

The German-born pulled out of Sundayâ€™s vital game claiming he aggravated an ankle injury after his clubâ€™s clash with Palermo last week despite playing until the end of the game.

GHANAsoccernet.com investigations on Wednesday revealed that AC Milan have stated the player as released for Africa Cup of Nations duty and even if heâ€™s injured as he claims he failed to turn up for treatment.

This revelation prompted the GFA to swing into action with vice-president Fred Pappoe insisting they are investigating the report sent by an AC Milan doctor.

Mr Pappoe told host of Joy FMâ€™s Supper Morning Show Kojo Oppong-Nkrumah, that his outfit has received a â€œstring of reportsâ€ from the club on Wednesday, buttressing the fact that he is indeed injured, but the FA would have to subject them to further scrutiny.

He explained that â€œmedical quotesâ€ from the club have been referred to the Black starsâ€™ medical team â€œto access it and give us an opinionâ€.

The FA vice-president said the association will take a final decision on the player based on their own medical reports.

â€œBut [until the report comes out] we have not taken any decision on him now as to whether to excuse him or invite him to come over.â€

Mr Pappoe also hinted that if the need arises, Kevin Prince Boateng would be invited to undergo â€œfurther medical examinationâ€.