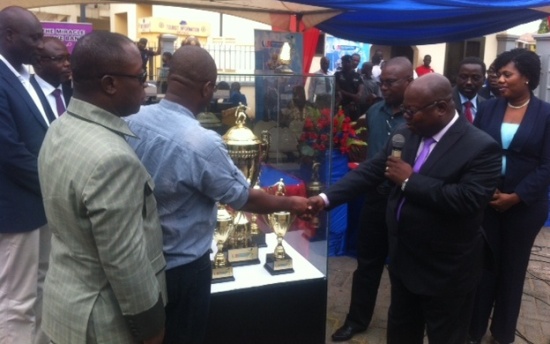 The Ghana FA has taken delivery of the new Premier League trophy from headline sponsors First Capital Plus Bank.

The trophy which was paraded through the principal streets of Accra on its arrival will be handed to the winners of the Ghanaian top flight.

The golden trophy stands at 90cm in height â€“ making it the second largest piece of silverware in world football only behind that of the English Premier League which stands at 104cm.

Winners of the Ghanaian top flight will only have the original trophy for keeps upon winning the title on three occasions.

The giant trophy was therefore accompanied by miniature pieces which will be handed to the champions when the original title returns to the Ghana FA when the championship resumes.

Chief Executive Officer of First Capital Plus Bank John Kofi Mensah says the trophy presentation to the Ghana FA is one of many planned innovations from the headline sponsors to enhance local football.

"We have decided to offer something special to Ghana football thus our sponsorship of the Premier League," he said at the ceremony on Monday. New Ghana Premier League trophy and its miniatures
"I believe this is the first time a presentation of this sort is happening.

"We want to offer unique football services to the fans and we must say we are happy so far with this partnership with the Ghana Football Association.â€

The trophy sill be in the custody of the Ghana FA only to be presented to the eventual champions of the Premier League at the end of the current campaign.

"On behalf of the Ghana Football Association I would like to thank First Capital Plus Bank for bringing us this trophy and its accessories," Nyantakyi said upon receiving the trophy.

"I receive this trophy on behalf of the association.

"And that whoever wins this trophy will be making history as the first team to win this giant trophy which I am told is the second biggest in the world.

"We hope this will go a long way to enhance the competitiveness of the Premier League as we strive to keep enhancing the local game.â€

Silverware pieces for the top scorer and best goalkeeper also arrived alongside the giant trophy.