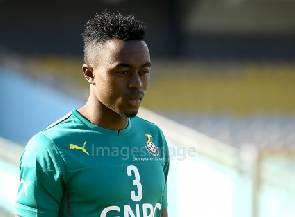 Joe Dodoo has not been cleared to play for Ghana yet

Ghana FA has rubbished reports that FIFA has completed the nationality switch for England youth striker Joe Dodoo to play for Ghana.

A report by a newspapes in Ghana claimed on Thursday that the Leicester City player has applied to FIFA for the switch which has been granted.

However the Ghana FA says FIFA has not started the process as all the documents needed to complete such a move have not been secured.

"We have not started the process let alone it being completed. The process is normally very long and takes some time to gather the paperwork needed," Ghana FA spokesman Ibrahim Sannie told Ghanasoccernet.com

"Once all the documents have been gathered we will make a formal application to FIFA before it will be considered.

"So I can tell you that FIFA has not cleared Joe Dodoo to play for Ghana. We are working on it."

Dodoo is seeking to play for Ghana after representing England at junior level.

The 21-year-old had declared his intentions to represent his native country.

The striker, who made three appearances for Leicester City’s first team, is keen to be granted the permission to represent Ghana.

The player was recently in Ghana to join the Black Stars at training prior to the team’s Cup of Nations qualifier against Mauritius.

He will thus not be available for selection when the Black Stars take on Rwanda in their final qualifier for the 2017 Cup of Nations in Gabon.

However, he can be made available for Ghana if the process is fastracked before the match in September.