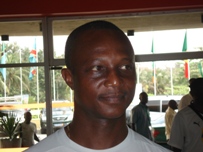 Appiah, an Ex-Ghana defender, was appointed to aid the Serb on a US$ 3,000 monthly salary which was widely criticized as paltry in comparison to the then USS$ 50,000 earned by his boss.

Rajevac is reported to be on the verge of signing a four-year contract extension on a US$ 66,000 monthly bill and it is expected his second-in-command will have his emolument improved.

"Assistant coach of the Black Stars is one of the staff in addition to that we have the goalkeeper's trainer, medical staff and all those people. There has been a continuous reviews of their contract and we are looking at that," Ghana FA president Kwesi Nyantakyi told Joy FM.

"You just don't take decisions but you must be mindful of your resources and ability to pay and where you are getting the resources."

Appiah has been key in Ghana's successes: The 2009 African Nations Championship, 2010 Africa Cup of Nations and the World Cup finals in South Africa.

The last time Appiah complained about his salary, he was given a two-week ultimatum by the Ministry of Sports to accept the US$ 3,000 or quit.