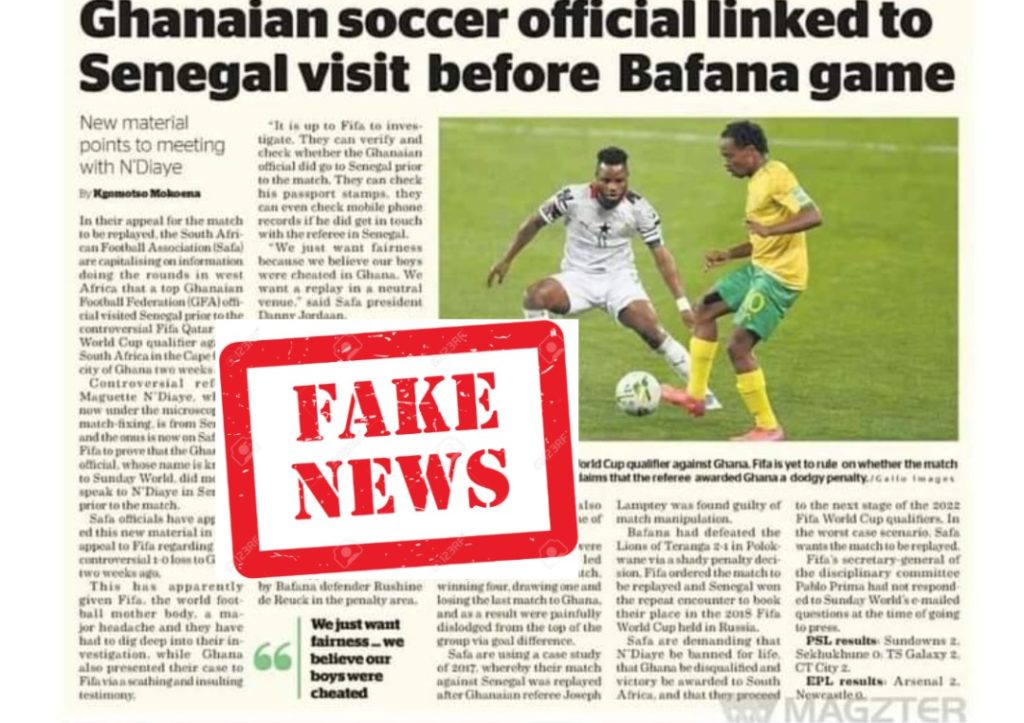 The Ghana Football Association (GFA) says it 'will not relent in exposing the fake news' by their South African counterparts after a newspaper report claimed that an official of the Ghanaian federation visited Senegal before the Black Stars clash with Bafana Bafana last month.

The GFA says none of its officials visited Senegal before the match and that the report is the latest 'sinister attempt' by South African Football Association (SAFA) to sway public opinion in its favour.

The GFA suspects SAFA is behind the report by the Sunday World newspaper in South Africa that claimed that a member of the Ghanaian soccer federation visited Senegal before the match that was played in Cape Coast.

Without stating it clearly, the report sought to imply that a high ranking GFA official visited Senegal to compromise the referee of the match who is Senegalese.

According to the report, SAFA has included this new evidence in an appeal to FIFA after Ghana versus South Africa brouhaha.

The report claimed SAFA has found this new material that points to match manipulation between referee Ndiaye Maquette and the Ghana Football Association.

According to South African news outlet, Sunday World, an unnamed GFA capo visited the Senegalese referee prior to Ghana's FIFA World Cup qualifier against South Africa, which was played two weeks ago.

SAFA has accused the GFA of indulging in match-fixing with referee Ndiaye after South Africa lost the game 1-0 in Cape Coast.

Even though the report did not state its source or name the GFA official that it claimed visited Senegal, the Ghanaian federation suspects SAFA are behind the report with the sole aim of twisting things in their favour with false information.

"Ignore them. This is fake news please. They (Safa) are trying to find wolf everywhere, anywhere and elsewhere," Ghana FA General Secretary Prosper Harrison Addo wrote on social media in response to claims of the Sunday World newspaper.

"Each day their story would change," Addo said referring to the consistently changing claims by SAFA since the Bafana Bafana were defeated 1-0 by the Black Stars in the crucial 2022 World Cup qualifier.

The GFA suspects the latest claim by the South African newspaper is the crafty but sinister plot of SAFA to throw in such an allegation without its hands being noted as the perpetrator.

In a match that determines who qualifies from Group G for the play-off round, a penalty goal gave Ghana the edge over the Rainbow country.

Ndiaye awarded the Black Stars a penalty after Rushine De Reuck pulled Daniel Amartey during a corner to prevent the latter from scoring from a rebound. Andre Ayew made no mistake to give dominant Ghana the win.

After the painful defeat, SAFA was not pleased with the referee's performance and thus issued a petition to FIFA with claims of match manipulation.

SAFA started by protesting against the penalty award but when replays showed that Reuck used both of his hands to prevent Amartey from scoring their story changed.

SAFA then commissioned a self- appointed referees' performance analyst Ace Ncobo who claimed he analyzed the performance of the referee of the game claiming he saw persistent bias against South Africa.

He made this claim even though two decent penalty calls for Ghana were ignored during the game.

The Ncobo analysis was roundly mocked in the African and Ghanaian media as the first time in the world that such a second-by-second analysis of s referee has been made.

With that effort looking like being condemned to failure, the publication by Sunday News claiming new material has been found sought to give hope to unsuspecting Bafana Bafana fans.

"The South African Football Association (SAFA) are capitalising on information doing the rounds in West Africa that a top Ghanaian Football Federation [Association] (GFA) official visited Senegal prior to the controversial FIFA Qatar 2022 World Cup qualifier against South Africa in the Cape Coast city of Ghana two weeks ago," the newspaper article said.

Sunday news further indicated that SAFA has added the supposed new evidence to their appeal to FIFA.

SAFA want the game to be replayed, the GFA has already sent their response and now a long-awaited verdict from FIFA has kept both associations in suspense.