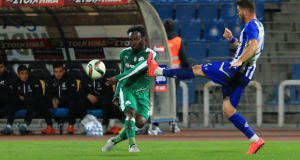 Asamoah Gyan has been warned by the United Arab Emirates FA for having “unethical hair.” The Ghanian star was among 46 players warned for it because he has hair that is partially shaved, which violates some Islamic teachings, according to the BBC.

The decision on whether a player’s hair is acceptable is left to match officials, some of whom are concerned about setting a bad example for children. To this point, Gyan and the 45 other players have received only warning letters. That is the first step and it will be followed by a fine and, eventually, suspension.

Gyan is currently with Al Alhi in Dubai, on loan from Shanghai SIPG. He recently got a mohawk for the Africa Cup of Nations and kept the hairstyle when he returned to Al Alhi.

Exactly how the rules are enforced and the consistency of them appear to be unclear. Ahdaaf, a site that covers Middle Eastern soccer, cited 2016 Asian Player of the Year Omar Abdulrahman being allowed to keep his hair, while a similar haircut earned Suhail Al-Mansoori a warning.