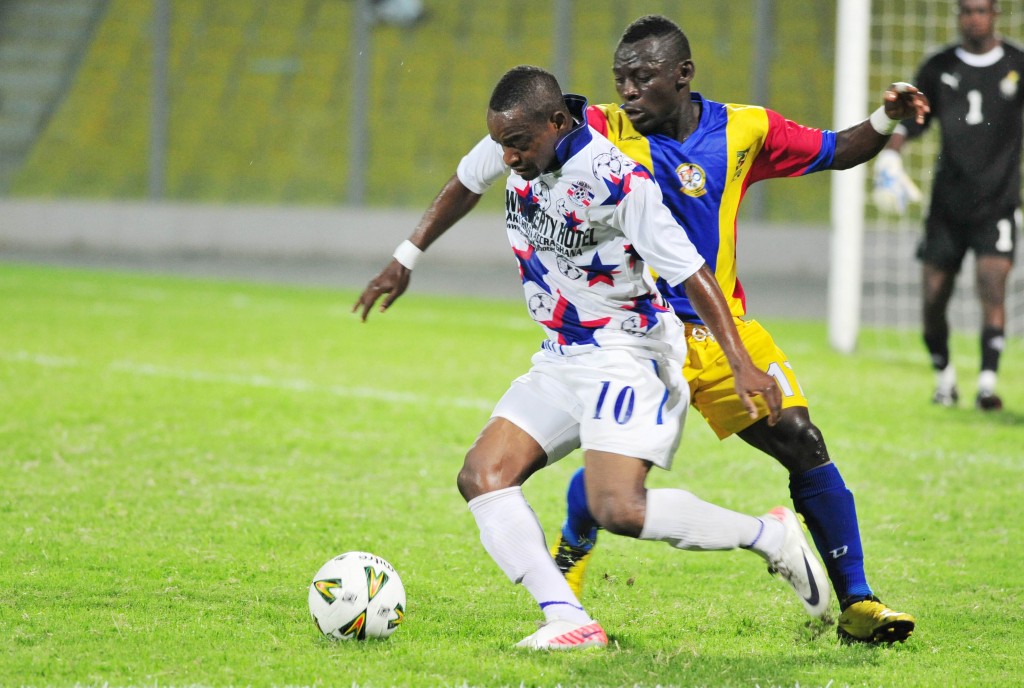 After seeing their eight-match unbeaten record came to an end at Bekwai in midweek, Asante Kotoko returned to the summit of the 10-week old league.

The Reds laboured to break down Dwarfs, hitherto unbeaten with a 1-0 win at the Baba Yara Stadium in a highly entertaining clash.

Medeama SC surged on the log with a stellar display against Mighty Jets while Hearts of Oak failed to put pressure on their arch rivals with a 2-0 reverse to Liberty Professionals in the late kick-off.

GHANAsoccernet's SADDICK ADAMS evaluates the individual performances of players on show on week 10.

The Fifa Under-20 World Cup winner had a couple of moments of danger to deal with but did so with minimal fuss.

He showed very good positioning to hold off Owusu Sefa's 30 yard drive in the opening minutes before stretching to his elastic limit to deny Mahatma Otoo in the 25th.

A very deserved clean sheet for the Liberty skipper.

Another impressive performance by the Dwarfs defender.

He showed incredible athleticism throughout the match as he got up and down the right side.

Adjei was able to prevent the hard working Nathaniel Asamoah from getting many deliveries into the area.

He was composed defensively as he stayed wary of the Dwarfs attacks.

The crafted left-footed player kept George Arthur and Michael Insaidoo relatively calm in the game and covered up very well for his center men especially when he swept the ball from the feet of captain Asiedu.

He beautifully interchanged with David Ofei before curling in the cross that met Nii Adjeiâ€™s head for the match winner.

Avor played a slightly different role at the Len Clay as he was more or less employed at the center instead of the usual right back.

However, he seemed to enjoy the freedom of role as the home side failed to threaten for most parts of the game.

He cleared his lines very well and kept on frustrating the AshGold attack with his timely tackles.

For the third time running, the Lens target has made it into my team of the week.

Ahmed Toure barely had a sniff the entire game and this was due to the well-time tackles and aerial dominance of the Black Stars defender.

His presence in the Dwarfs defence makes a world of difference as it would to any side. Was unlucky not to taken a point back home.

Medeama's best player in the match.

It was a vintage Jacob Appau performance full of marauding runs at the Jets defence.

Started on the right but drifted into space and found himself on the left to deliver several crosses one those which set up Sampson Cudjoe for the opener.

Sealed victory for his side with a fine taken goal in the first half and was close a couple more time to doubling his tally with a perfectly executed half-volley that was saved by the Jets goalie in the second period.

With Michael Akuffo and the influential Yahaya Mohammed sitting out, Yeboah was given the daunting task of filling in the big boots and he that to a near perfection.

The youngster quelled a lot of Dwarfs attack with his no nonsense tackling approach.

He started brightly as his strength allowed him to get the better of Asiedu early on.

Yeboah provided a reliable shield for his defence.

Brilliant, tricky and a predator. He finished the break in the 11th minute to open the scoring.

Sarfo Gyamfi weaved his way past two Edubiase defenders, twisting in the box before scoring with a toe-poke to the blind side of Eric Nii Baah.

His movement and vision enabled him to find plenty of room and cause problems for the guest defence with several darting runs.

A bundle of energy throughout the game, he always looked the most likely to make something happen for Liberty.

He was constantly pressing and probing in the middle of the field as he took total control of the center especially in the second half.

The leader of the Liberty team carried a real attacking threat to his opponents.

He showed a great eye for goal as he popped up to connect a Godfred Saka's rebound for his sideâ€™s winner.

He travelled the field as Aduana dominated play.

The ex-Liberty man was a constant danger with his runs from midfield and linked excellently with Akwasi Addae Apraku.

In a week when most of the top strikers failed to glitter, the youngster rose to the height.

Abban showed his intent early in the game when he beat two Hearts defenders before his shot deflected unto the cross bar.

He was a real handful for the Hearts defence.

He connected well with a Daniel Gyamfi cross to open the scoring before mopping up a loose ball by firing low past Sammy Adjei.

If his first was clinical, his second was sublime.

The lad has a bright future.