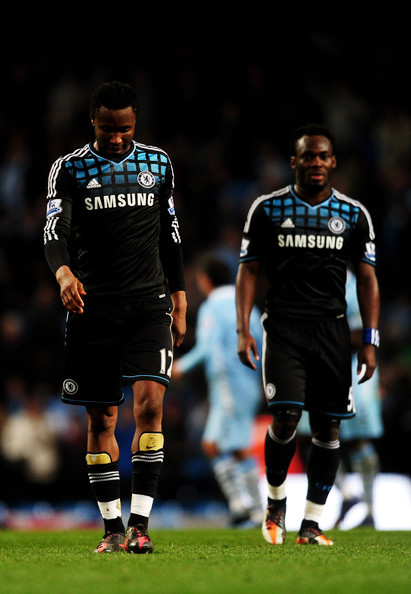 Former Nigeria international Mikel Obi has named Ghana’s Michael Essien as one of his best teammates.

Mikel and Essien spent eight years together at English side Chelsea before the latter left to join Real Madrid during the 2012/13 season.

But the ex-Black Stars midfield dynamo left an indelible impression on his Nigerian counterpart as he mentioned him among the best teammates he had during his illustrious career.

A long-time teammate of Mikel’s with the Super Eagles, the duo played together with the national side for the best part of the decade.

They were key figures of the Nigerian set-up during that tenure, helping the West African transition away from the dying embers of the Golden Generation before ushering in the new era under Stephen Keshi.

The pair featured together at the 2014 World Cup, as Nigeria reached the Last 16, and were a part of four Nations Cups squads together—memorably winning the Afcon in 2013.

Check out which other players made Obi’s list below;

Essien arrived at Chelsea in a big-money transfer from Olympique Lyonnais, and enjoyed an excellent stay in West London.

The Ghanaian powerhouse, often playing alongside Mikel, redefined the defensive-midfield position as a whole and was also a very efficient full-back when needed.

His 17 goals and 168 appearances speak for themselves, even if injuries ruined the latter stages of his career. He was a Champions League winner alongside the Nigerian in 2012.

The evergreen Kanu overlapped with Mikel for several years at international level, with the latter making his debut in 2006 and the veteran remaining on the scene until 2011.

Together, they were semi-finalists at the Africa Cup of Nations in both 2006 and 2010, although both underperformed at the 2008 event where the Super Eagles limped through the group before falling to hosts Ghana in the quarter-finals.

No other Nigerian players have made more Champions League appearances than Kanu (60) or Mikel (59).

While Okocha was winding down just as Mikel was beginning his international career, the two Super Eagles greats did overlap at the 2006 Africa Cup of Nations.

This was the tournament where Mikel truly established himself as an Nigeria player, scoring after coming off the bench against Zimbabwe before earning a starting match for the next match against Senegal.

The West African giants, ultimately fell in the semi-final, where they were downed by Drogba’s Ivory Coast, as Okocha was introduced from the bench to replace the ineffectual youngster.

Drogba has been voted Chelsea’s best-ever player by the fans, which in itself speaks volumes of the impact he made at the London outfit.

Capable of the spectacular at any given moment, Drogba scored 136 goals in 381 appearances for the Blues and provided many a captivating displays in the famous blue shirt.

He is a bona fide Chelsea legend and was the key figure in 2012 as Mikel's Pensioners became the first London club to win the Champions League.

Samuel Eto’o arrived at Stamford Bridge in the twilight of his career but still showed glimpses of his ability in his 12 months at the club, as he overlapped with Mikel.

Having played for Jose Mourinho at Inter Milan, he joined the Portuguese manager at the London-based side in 2013, and managed a memorable hat-trick in a 3-1 win over Manchester United, one of his better performances for the Blues.

Mikel has become a free-agent since terminating his contract with Turkish side Trabzonspor some few weeks ago, after the club failed to grant him his wish to be with his family amid the coronavirus pandemic.