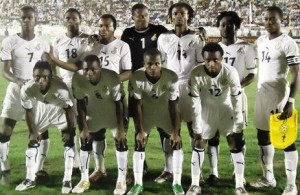 Ghana lost 4-3 on penalties to Togo in their second leg Wafu Nations Cup Group B tie and set-up a semi-final clash with hosts Nigeria.

Both teams were tied 3-3 on aggregate after a 2-1 defeat on Tuesday afternoon in Abeoukuta.

The national Under-23 team went down courtesy an own goal in the 54th minute but Kotoko striker Nathaniel Asamoh leveled four minutes later.

Togo went ahead in the 69th minute and pushed the tie to penalty shoot-out after losing 2-1 to Ghana on Sunday.

The two teams had to square-off twice to determine the leader of the Group after opponents Senegal and Gambia withdrew.