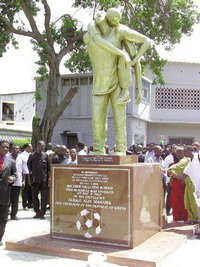 Ghana football authorities are on Monday marking the 10th anniversary of the country's and Africa's worst football tragedy.

Christian and Muslim prayer services have been organised in the country for the 126 fans who perished during a football game in Accra.

The fans perished exactly a decade ago during a league match between arch rivals Hearts of Oak and Asante Kotoko.

Police officers fired tear gas into the stand in their efforts to control rioting Kotoko fans after Hearts overturned a one-goal deficit to lead 2-1 rather ended the lives of 126 fans who were crashed to death while attempting to escape.

"As the years roll by, the Ghana Football Association and the entire nation move on steadily by offering prayers for the departed fans and support to the affected families while trying to erase the scars of the tragedy," the Ghana FA said in a statement.

The government is considering organising a football match later this month to help foster unity among fans of the two sides.