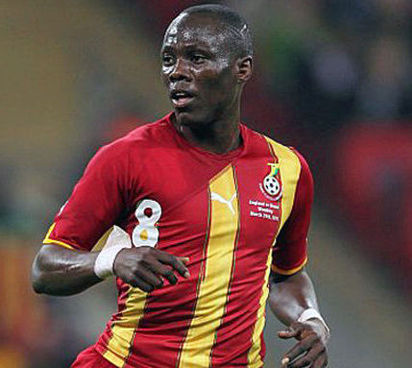 Midfielder Emmanuel Agyemang-Badu says his immediate focus will be on club duties and not a place in the Black Stars for the World Cup qualifiers in June.

The 22-year-old capped his return from a two-month injury layoff with a goal for the Udinese reserves on Saturday.

Badu who was one of Ghanaâ€™s best players during the 2012 Nations Cup until his injury at the tournament however says he is not eying an immediate return to the Black Stars as he warms his way back to top competitive football.

â€œMy colleagues have done a good job during the time I have been injured and I hope to come and help them finish the season well,â€ he told Accra-based Radio XYZ.

â€œFirst I have to think about my club, we have three matches to go so I am looking forward to helping them secure a Champions League or Europa League spot.

â€œI know the national team have some important matches which for sure we must win but I need to be a 120% fit first before thinking of playing in the Black Stars.â€

Badu has grone into becoming one of the key players for Ghana since bursting on the scene in 2009 where he helped the national U-20 side to an historic World Cup feat in Egypt.