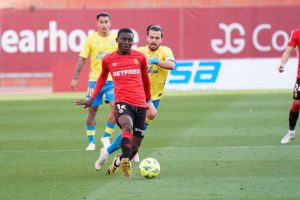 Ghana’s defensive midfielder Iddrisu Baba is excited by the performance of La Liga chasing Real Mallorca after the first round of the Segunda B league.

Baba has been instrumental for Mallorca despite suffering relegation to the second tier last season.

The swashbuckling midfielder has played a key role as Mallorca finish the first round in second place keeping their La Liga return alive.

Ahead of Mallorca’s trip to Real Vallacano, the 25-year-Old has called for calm insisting the work has only been half way done.

“We have done a good job and we still have the opportunity to do better . At the moment it is a very good position that we are in at the moment. In general, I think we have done well, but we are only halfway there and we have not yet reached the goal,” said the Ghanaian midfielder to Real Mallorca’s media.

Real Mallorca manager Luis Garcia Plaza has promoted several players from the youth side to compete for positions in the senior team. A decision Baba says has brought the best out of the team and insists the seniors give have been supporting the young ones as they step up in their careers.

“When I see these players, I can remember going through the same procedures as them. We help young people most of the time, because we have been on their site before. Sometimes we do make small corrections that help them . We try to help them,” said Baba.

Baba revealed the tactics of manager Luis Garcia has also been effective since his arrival.

“We play with two midfielders, so the two of us who play need to apply a lot of pressure. I think we are doing very well. It's not like the old way we used to defend and play . It's good, although at first it was a bit strange, but I had to adapt to the system,” he concluded.