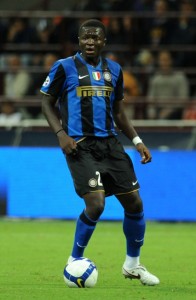 Ghana midfielder Sulley Muntari is at loggerheads with his agent after the midfielder rejected a proposed bumper move to Turkey to play for giants Galatasaray.

The Turkish giants slapped in a huge offer for the Ghanaian midfielder last week as they are ready to pay the $10m Inter Milan are asking for the left-winger.

Galatasaray also made a hard-to-resist salary offer to Muntari by doubling the wage he receives at the Italian which means the Turks are ready to pay him Two million Euros per year.

But Ghanaian midfielder, who finished the season on loan at Sunderland from Inter, insists he wants to stay at the San Siro and see out his contract.

"I am going back to Milan and start pre season with Inter and then we will see how it goes. But I want to stay in Italy and play with Inter because that is my team," he said.

"This is part of the job and happens regularly in this business. It's not a new thing. When the season ends and market opens it always happens so I am used to it."

Inter are keen on offloading Muntari at the price offered by Galatasaray because they can risk leaving him for free next season when his contract expires.

Galatasary are keen to bolster their squad next season following a rather difficult campaign that saw them finished eighth on the league table last term.

The club have set eyes on luring the 26-year-old who is believed to be surplus to requirements at dethroned Italian champions Inter Milan after completing a six-month loan spell at English side Sunderland.