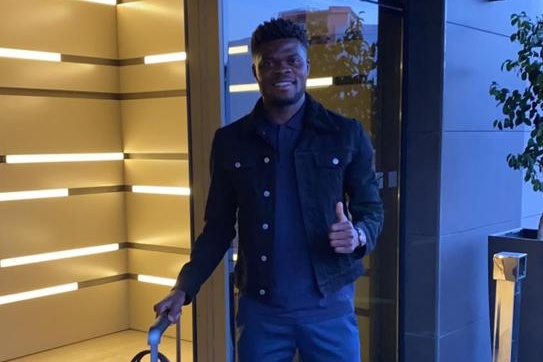 Ghana superstar Thomas Partey has arrived in England to begin his Arsenal career after sealing a move to the English giants on transfer deadline day.

Partey had to complete his medical and move straight to join Ghana's camp in Turkey due international break as the Black Stars prepared for their international friendlies against Mali and Qatar.

The former Atletico Madrid midfielder featured in the two friendly games but showed glimpses of his explosive performance in the game against Qatar which he provided two assists to help the Black Stars beat the Asian champions 5-1 in that friendly.

The 27-year-old signed a five-year contract at English giants Arsenal on transfer deadline day to end months of speculation over the move of the versatile player to England.

Partey underwent a successful medical examination in Madrid before putting pen to paper on deal until 2025 and will pocket £250,000 as weekly wages.

Arsenal got their man on transfer deadline day after Mikel Arteta's men agreed to meet his £45 million buy-out clause.

Partey is the sixth player to sign a permanent deal with Arsenal this season following the signing of Willian, Pablo Mari, Alex Rúnarsson, Gabriel and Cédric Soares.

Arsenal is set to unveil the Ghanaian International on Wednesday.