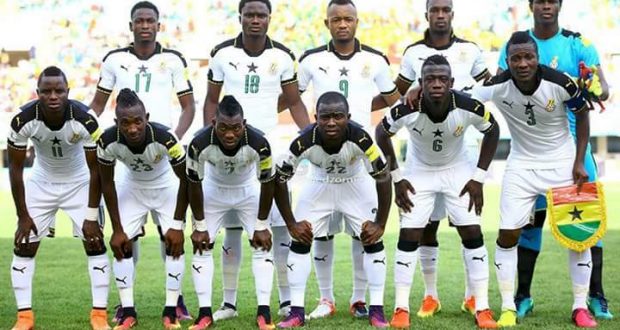 Black Stars are currently third in the group
Share

Ghana must win their remaining two matches and hope Congo get a win in Egypt to ensure that the Black Stars qualify for the 2018 World Cup in Russia.

Ghana currently lie third in group E. With 4 in the group only one country can qualify.

They’re 4 points behind Egypt, who only need one win to guarantee top spot. Ghana travel to Uganda on Saturday in a tough contest.

The last time these two sides met was back in January with a 1-0 victory for Ghana.

It is always a close encounter between the two sides, 2 draws and 1 win for each in the last 4 encounters, only 1 goal between the sides in each victory.

This will be likely another tight game and a great one to look forward to.

All the football odds for the World cup qualification can be found here.

Due to Uganda’s long absent in the competition, they are least expecting to qualify from the group. However, their recent games have shown they came spring up surprises, and they lead Ghana by two points.

If Ghana can put up a similar performance to last January they can clinch an away victory. However, we feel that Egypt is too far ahead of Ghana and relying on them to lose will not give them much confidence coming into this game.

Uganda will feel they still have a great chance, a win against Ghana and then they face the easiest weakest country from the group, Congo.

The chances are much higher for Uganda, as well as being at home we feel they can clinch the victory.

Uganda caretaker coach Moses Basena has recalled two instrumental midfielders to the squad that will battle Ghana in a 2018 FIFA World Cup qualifier next month.

Tony Mawejje and Geoffrey Kizito, who missed the double-header against Egypt through, have been included for the must-win match at the Mandela National Stadium in Kampala.

The Uganda FA have confirmed that Basena will remain in charge for the remainder of the qualifying campaign.

He took over following the acrimonious split with Milutin Sredojovic, and led the side to a famous 1-0 win over seven-time Nations Cup winners Egypt.

Other than the Ghana clash, he will also oversee the final qualifier away to Congo.

The senior national team will travel to face the Cranes at the Mandela National Stadium next month in the penultimate qualifier.

Captain Asamoah Gyan and other top players like Thomas Partey, Daniel Amartey and Jonathan Mensah have all been named in the squad.