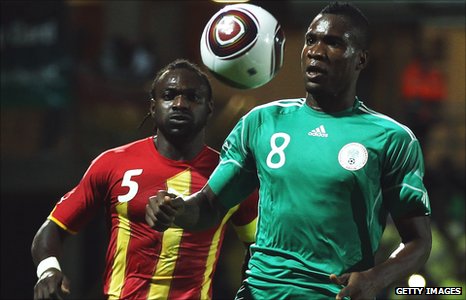 Organizers of the international friendly between Ghana and Nigeria have expressed disgust at circling reports Tuesday's match was fixed.

Justin Addo, the CEO of JV2i consult (the match organizers) incurred a massive loss when the original game scheduled for August 9 had to be cancelled following riots in London.

However, speculations are rife after the big West African derby ended in a disappointing stalemate with many claiming a match of convenience had been played but Addo has vehemently dismissed these claims.

"I find it extremely insulting for anyone to suggest that Tuesday's friendly was fixed," he told Kumasi-based Angel FM.

"Do you think I am a fool to spend this much money to bring these many people here only to fix this game?

"The Nigeria coach was playing for his future, the Ghanaian players were playing for their Nations Cup future and therefore I find it very insulting also to the players and their officials that such a much is fixed."

"Do you realize that if Ghana had been beaten Stevanovic (Ghana coach) would be under serious pressure? So no one should even think off let alone suggest that this game was fixed."

The Super have failed to qualify for next year's Africa Cup of Nations in Gabon and Equatorial Guinea were able to deny the Black Stars on Tuesday of which many thought prior to the game was a cool chop.