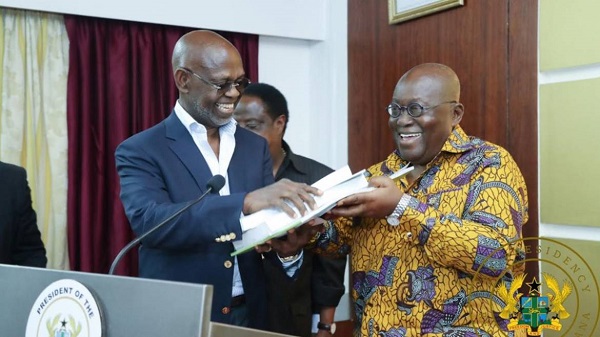 Ghana is planning an ambitious-bid to stage the 2038 FIFA World Cup and the Olympic Games as part of its 40-year national development plan, developed by the National Development Planning Commission (NDPC).

The Director-General of the NDPC, Dr Nii Moi Thompson in an interview on Metro TV's Good Evening Ghana program on Tuesday night revealed that the bid is dependent on the country fulfilling other financial and infrastructure targets set in the draft National Development Plan which was handed over to the government last month.

According to Dr Thompson, as part of the long-term development plan, Ghana plans to host international events like the World Cup and Olympic Games.

As part of the 40-year development plan, a new stadium called the "Black Star Stadium" will be constructed with the "best 21st Century technology while the roof would be made up of solar panels". The stadium will be connected to road and rail networks.

Ghana has not hosted a Fifa World tournament or the Olympic Games in its 60-year history.

If successful, Ghana will become only the second African country after South Africa in 2010 to stage the FIFA World Cup.

President Akufo-Addo who received the 40-year national development plan on September 26, 2017 and admitted that it “presents my government and subsequent governments with a daunting task, not so much the implementation, but to stay on track and ensure we have the desired outcome. We must be able to monitor our progress, and redirect our paths when we seem to be deviating from them.”

He continued, “We must, therefore, make rapid progress, and do things to ensure that we achieve it.”

Without pre-empting the contents of the plan, President Akufo-Addo in stating some of his aspirations was hopeful of a Ghana with “a strong, buoyant economy that will provide decent jobs for all; and that our school leavers from secondary and university will not spend an inordinate amount of time, as they do now, to get a job or create one for themselves and for others.”

He added further that he was hopeful of that being a Ghanaian “will be associated with tangible benefits, such as free basic education, a good healthcare system, the rule of law and security in the country; and that, reciprocally, the citizens will exude levels of discipline and professionalism that engender efficiency in the management of our institutions and the development of our society”, amongst others.

One thing which is certain, according to the President, is that “we must not and cannot fail in taking up this journey. We need to seek out those who are not yet convinced and bring them on board; and we need to have people to champion the different aspects of the plan, in particular the key milestones. We must figure out how we sustain the interest of key constituents, especially the youth, who will be at the helm of affairs in the not too distant future.”

President Akufo-Addo, on behalf of the people of Ghana, government, and on his own behalf, expressed his sincere gratitude to the Chairperson for the policy direction provided, and to the Director-General, Dr Nii Moi Thompson, for the organisational and technical leadership that got this document out.

“From the little I know of the operations of the Commission, I am aware that each and every one of you, the members of the Commission, have made significant input into this document. Your experience and knowledge have no doubt been brought to bear in the drafting of the document. I wish, again, to thank you all for the contribution you have made,” he said.

President Akufo-Addo also expressed his “sincere appreciation for the collective decision you have made, without the compulsion of law, to submit your collective resignation to allow the principle of ‘new King, new Law’ to operate. It is a mark of high patriotism and I am grateful for it.”

Former President John Mahama in August 2015 launched a process for the preparation of a long-term National Development Plan for the country which will span within a period of 40 years.

The plan, which was being spearheaded by the NDPC, is aimed at shaping Ghana’s future and complementing the existing medium-term development plans of the country.

Dr. Botchwey had prior to the December 2016 general elections advised the various political parties not to neglect the implementation of Ghana’s National Development plan.

According to him, the plan must be incorporated into political parties’ manifestos to ensure the country’s set development targets are met in spite of political transitions.