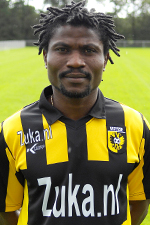 Ghana midfielder Laryea Kingston played his first match for Vitesse Arnhem in the Dutch Eredivisie on Saturday in their 2-0 win over Heracles Almelo.

But the 30-year-old picked up an injury on 54 minutes and was replaced by Serbia international Nemanja Matic.

Kingston completed his move to the in September this year as free agent after being denied a contract extension by Scottish side Heart of Midlothian.

Also in the Dutch Eredivisie, Eric Addo made his first start since the start of the season for Roda JC as they were humbled 3-1 by a De Graaschap.

The former PSV Eindhoven man's first half performance was unsatisfactory and was replaced after half time.

Richard Kingson took charge of the Blackpool's goalkeeping duties and was impressive in their 2-1 home victory over Wolverhampton Wanderers for the first time in 42 years.

Kingson needed to be on high alert to prevent Ebanks-Blake but there was nothing he could do about Kevin Doyle's consolation on the 86th minute.

Queens Park Rangers strengthened their grip on the lead in the Npower Championship by beating Preston North End 3-1.

Burly forward Patrick Agyemang came off the bench on the 80th minute to play against his former club.

Albert Adomah played 86 minutes for Bristol City which beat Leicester City 2-0 to lift themselves out of the relegation zone.

Winger Lloyd Sam played the last five minutes for Leeds United's 1-1 draw at Norwich City to move to fifth place on the log.

Hibernian's resurgence grounded to a halt at Inverness as they slumped to a 4-2 defeat at the Caledonian Stadium.

Ten-man AS Roma buttered Udinese 2-0 to move up to third place.

Kevin-Prince Boateng was a 77th minute substitute for AC Milan which stretched their lead at the top of the Serie A log to four points after a 1-0 win over Fiorentina at the San Siro.

Boateng replaced Brazilian Robinho mid-way through the second half.

Elsewhere in the Serie B, Ahmed Barusso missed out of Livorno's first team squad that recorded a deserved 2-1 win over ten-man Empoli at home.

Andre Ayew came off the bench on the hour mark and headed the goal that separated the two sides with two minutes left for play.

His younger brother Jordan was an unused substitute.

Youngster Abeiku Quansah sat on the bench for OG Nice in their shock 0-1 home defeat to Montpellier.

Defender Isaac Vorsah lasted the entire duration for TSG Hoffenheim which travelled to the Commerzbank Arena to destroy Frankfurt 4-0.

But striker Prince Tagoe warmed the bench for the Hoffs.

Schalke 04 are gradually lifting themselves from the bottom ranks of the Bundesliga after posting a 4-0 win over giants Werder Bremen.

Left-back Hans Adu-Sarpei was out of the Schalke first team.

Kaiserslautern recorded their first victory in three games at the expense of Nurnberg at the Easy-Credit Stadion.

Striker Isaac Boakye was not picked for first team action by Nurnberg.

Haminu Draman watched from the bench as Lokomotiv Moscow secured a 1-2 away win at FK Rostov-Na-Donu.

Midfielder Akwetey Mensah was out of action for SK Lierse which lost 1-3 at home to Dennis Odoi's St. Truiden.

Issah Ahmed was at the heart of defence for Randers FC which drew 3-3 at Lyngby.

Eric Frimpong grabbed the winner of Club Sportif de Hammam-Lif in their 2-1 win over Stade Tunis.