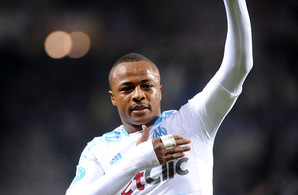 Ghanasoccernet.com reports on goals from Jonathan Mensah and Fred Benson in the second-tier Spanish and Dutch Leagues and also picks its team of the week.

Here is a summary of Sundayâ€™s action abroad.

Juventus moved to third place on the Serie A log at the expense of Genoa after a 0-2 away win at the Comunale Luigi Ferraris.

Youngster Richmond Boakye-Yiadom was not selected to face the Bianconerris.

Palermo compounded Cesena's troubles by subjecting them to a 2-1 home defeat.

Appiah was cautioned on the 43rd minute for an indecent challenge.

Charles Takyi was dropped to the St. Pauli bench as they shared the spoils with Wolfsburg on Sunday afternoon.

The midfielder watched the action from the bench as Pauli picked their first point from five games in a one-all draw.

Godfred Aduobe was conspicuously missing from the Karlsruhe first team that suffered a 3-1 at FC Augsburg in the Bundesliga II.

Nana Kwasi Asare is yet to make a return from his long term injury.

He watched from the stands as his FC Utrecht posted a sweet 4-0 win over NEC Nijmegen.

Youngster Erixon Danso was also out of the first team squad.

Manchester City recorded an emphatic 4-1 win over Fulham at Craven Cottage to stay in fourth place.

Quincy Owusu-Abeyie started from the bench for Malaga in their disgraceful drubbing by Deportivo La Coruna away.

The former Arsenal winger came off the bench on the 60th minute but could not help Malaga reduce their deficit in a 3-0 defeat.

Jonathan Mensah got on the score sheet for Granada FC in their 2-3 away defeat by Numancia.

The center-back halved the deficit for Granada moments after the break but they could not head for the leveler as Numancia went ahead to score two more.

Wakaso Mubarak was an 82nd minute substitute for Elche FC which failed to register a win over Girona in a barren draw on Saturday.

Bernard Kumordzi played the entire 90 minutes for Panionios and ensured they secured a 1-0 win over Larissa at away.

Standard Liege were handed a reality check at Zulte-Waregem on Sunday evening.

Defender Daniel Opare was in full time action for Liege but could not help them escape the 2-0 loss.

Enoch Adu-Kofi lasted the entire duration for FC NordsjÃ¦lland which were defeated 2-1 by FC Copenhagen.

The former Under-17 ball winner was yellow-carded in the 31st minute.

Samuel Inkoom scored in a penalty shoot-out to aid FC Basel's progress to the next stage of the Swiss Cup.