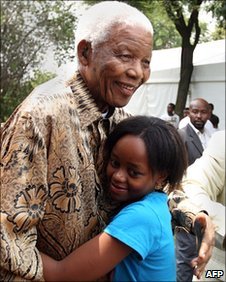 South Africa iconic leader Nelson Mandela has invited Ghanaâ€™s World Cup players to meet him on Saturday because Â of their sterling performances during the tournament in his country.

The Black Stars will confer with the highly respected Nobel Prize award winner in Port Elizabeth whether they win their quarter final match against Uruguay or not.

The meeting is meant to give the Black Stars the opportunity to meet and talk with Mandela who is known to be an ardent football follower.

The Black Stars will be hosted to a dinner with the ex-South Africa president who is expected to thank them to representing Africa very well in the tournament.

Ghana is the only African side to have reached the second round of the tournament despite having six sides from the continent in the competition.

Ghanasoccernet sources inside the Black Stars camp say the players are also planning to return to visit Mandela if they advance and win a medal.

They will show their trophies to the leader before they depart for Accra if they manage to reach the last four and win a medal.

Mandela remains one of the world's most revered statesman, who led the struggle to replace the apartheid regime of South Africa with a multi-racial democracy.

Despite many years in jail, he emerged to become the country's first black president and to play a leading role in the drive for peace in other spheres of conflict. He won the Nobel Peace Prize in 1993.

Since stepping down as president in 1999, Mr Mandela has become South Africa's highest-profile ambassador, campaigning against HIV and Aids and securing his country's right to host the 2010 football World Cup.

The government of South Africa has hailed Ghana for uplifting the image of Africa during the tournament.