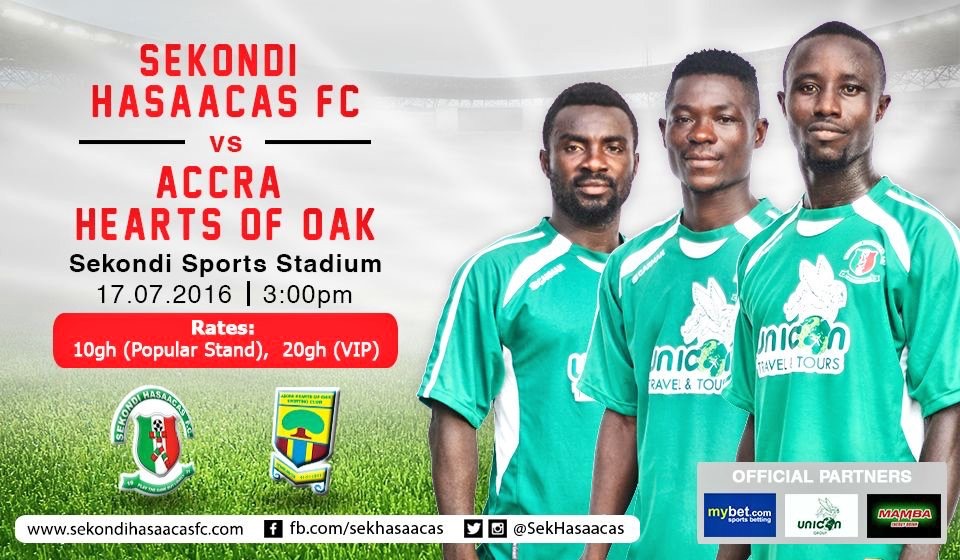 Sekondi Hasaacas will be seeking to dent Hearts of Oak's unblemished away record this season in the "Match of the week" at the Essipong stadium.

Anything short of victory for the Western giants will see them in the drop zone.

Centre back and captain Daniel Agyin is suspended for the game this weekend due to yellow card accumulation.

New recruit Justice Blay is in line to replace the consistent defender.

Ghana U20 star Saliw Babawo returns to the team for the Hearts of Oak clash.

Hearts of Oak are optimistic to keep their unbeaten away run with a win or draw on Sunday against Hasmal.

The Phobians trek to the west without former Sekondi Hasaacas captain Richard Yamoah who is yet to recover fully from a long injury layoff.

Kassenu Ghandi is available for selection game after he missed last Sunday's fixture with a slight knock.

Midfielder Emmanuel Sabahn Laryea looks very doubtful ahead of the match this weekend whereas Owusu Bempah is likely to be back into the start list.

*Hearts of Oak have lost only one of their last eight premier league fixtures. (W3 D4 L1)

*Hearts of Oak are unbeaten in their last twelve away matches in the premiership. They have won four and drawn five this term. (W5 D7 L0)

*The Westerners have managed to beat the Phobians only two times in their last nine meetings in the premiership. (W2 D3 L4)

*Sekondi Hasaacas have managed to keep only one clean sheet at home in the league this season.

*The Rainbow outfit have kept four clean sheets at away in the premiership this term after nine games.