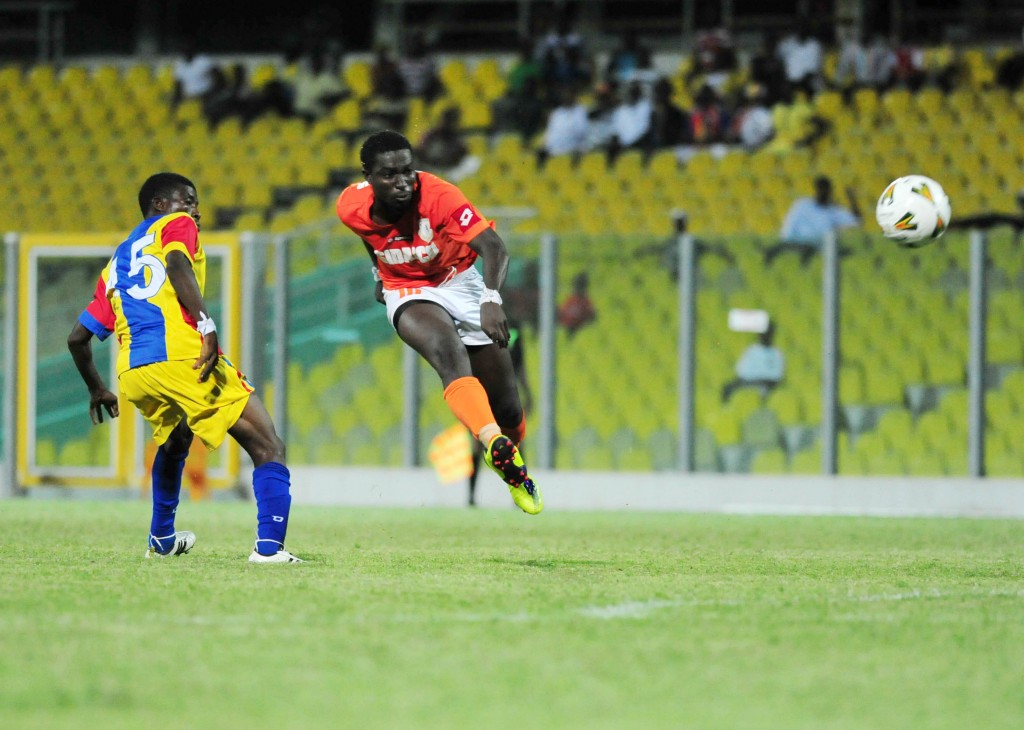 The leadership of the Glo Premier Leagu has yet again changed hands as Hearts Of Oak dramatically ended their unbeaten run with a narrow 0-1 loss to Ebusua Dwarfs with Asante Kotoko taking advantage of their rivalsâ€™ slump.

Bechem United however continue to make the headlines for all the bad reasons when they were yet again subjected to an avalanche defeat at Liberty Professionals.

There were some impressive Â individual performances from the centers after the mid-week matches.

GHANAsoccernetsâ€™ SADDICK ADAMS picks his top performers for the team of the week.

The former Ghana U-20 goalkeeper had to be at his best in the early exchanges against the Phobians. Three first-class saves in the first half made him a formidable obstacle and gave his side the confidence to push and win against a side who had conceded just a goal hitherto this fixture. Single handedly manned the homestersÂ Â  defence after Black Stars center back Rashid Sumaila was sent off in the second half to keep Mahatma Otoo and Uriah Asante at bay.

The high flying full back was the new league leaders' only livewire especially in the first half despite their 1-0 win. His usual surging runs werenâ€™t lacking either as he pressed hard from the right flanks until they won on the stroke of full time. Curled in several in swingers but his attackers didnâ€™t help matters most.

The agile defender played his part in a solid performance at the Baba Yara stadium. He continually provided menacing raids down the left flank, resulting in gilt-edged chances for Taminu Muntari. It is a pity the striker was not equal to it and more disgustingly, they had to leave Kumasi without a point.

Fast becoming the perfect replacement for the once trusted but departed Lee Addy. Adams was the bedrock of the Chelsea defence albeit against a lackluster Tema Youth side. Was not afraid to move forward as he became effective in both boxes. Organised his defence very well to make sure the blues foiled any attack from the newly promoted side.

Still proving to be a top class defender for the fire boys. If Aduana are to shake up at the end of this season, it will largely depend on whether Akouko is ever-present. The bulky center back has been the main pillar in ensuring a near-perfect defence for his side and his performance against Lions who have been a boggy side of the Dormaah based club wasnâ€™t an exception. No wonder he won the man of the match award.

Another masterful display of pure artistry by the young midfielder. The 19 year old has been the driving force behind much of the Upper West sidesâ€™ exploits at the Wa park. In just his first competitive top flight season, Salifou has consistently put up a sterling performance to ensure their smooth start to the season. His sublime through passes has been dangerous to deal with by any opposition and if he continues to play this way, then a midfielder is born.

Makes my team of the week for the second time this season, which suggests the first time wasnâ€™t a fluke. Once again he proved to be the talisman at the Sly Tetteh Park. Was the lubricant of the full Liberty machinery that cruised to a 5-0 victory over Bechem United. Capped his performance with a well deserved brace.

Tenacious,willing and unselfish are the words you associate with Arthurâ€™s performance against Hearts Of Oak. In a team full of midfielders, he gave his team-mates the freedom to express themselves. Did all the defensive work and normally pops up in the opposition box and was gifted in one of those situations as he unlocked the Hearts of Oak defence with a brilliant goal.

The former Asante Kotoko striker pestered the miners defence all day and was rewarded for his efforts with a brace, one of them an expertly taken penalty kick. The ex Kaizer Chiefs man was a constant threat to the Ashgold defence as they found his pace very uncormfortable to handle. Fatau Dauda stood between him and a hatrick when his late powerful volley was parried over the bar by the experienced goalkeeper.

The marksman is finally back to his best. Drove a host of powerful long range shots at the Youth goal, one of them left the guests goalkeeper Kofi Mensah unconscious for four minutes in his attempt to save it. His speed,power and thirst for goal never lacked as he scoredÂ  his third in two matches to push the blues upward.

Unarguably the man of the moment in the six week old league. Already has eight goals to his credit and has scored in all but one game. For the fourth week running,Baffour has made it into my team of the week. I have been looking for reasons to leave the flying attacker out but heâ€™s in such a breathtaking form I canâ€™t.His well worked brace against Wassaman FC is a clear testament of what we should expect from the man this season. If he is to maintain this current form for long, he can hit and cross the 20 goal mark. Well am afraid its early days yet but you canâ€™t take anything away from the young buzzing attacker now.

Coach Of the Week-Professor Mintah (Dwarfs)